According to one of our trusted tippers and backed up by a leak that surfaced earlier today at Android Central, Samsung Epic 4G and Transform owners will be finally getting a taste of Android 2.2 "Froyo" in 4 days - on Monday, March 21st.

It wouldn't be the first time Sprint tried to throw the delicious treat at Epic users - the long-awaited Froyo update began rolling out on February 21st but only lasted 3 days before getting shut down by Sprint due to multiple complications with SD cards and data connectivity. Froyo's most coveted features, such as push notifications, native apps2sd, and Adobe Flash support, plunged into an abyss of unknown depth yet again for those who didn't get a chance to upgrade. Those who did... well, let's hope your SD card data didn't turn into mush.

I know both Sprint and Samsung "cried wolf" too many times, but from what we gather, the March 21st date is the real deal. The Epic 4G will see Android 2.2.1 (EC05), while the Transform will get Android 2.2 (EB28). Additionally, there is a minor upgrade, also EB28, coming to the Galaxy Tab, which is already on 2.2.

All updates introduce Sprint ID, whether you like it or not, as well as Swype on the Transform, and will be rolled out over-the-air (OTA). We are crossing our fingers and hoping for a smooth upgrade this time around, but, of course, anything is possible.

Verizon Fascinate users, you're up next - the word on the street is, you won't have to wait long. 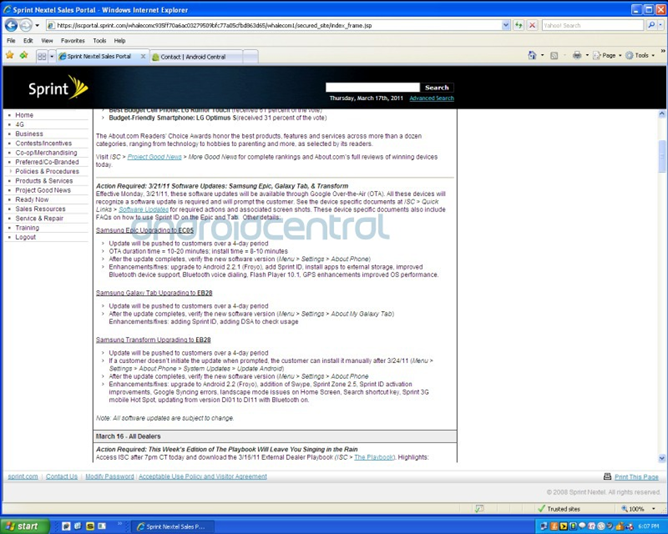