It seems that the Android Market's gaming content has been improving by leaps and bounds lately, has it not? It was just a few months ago that Doodle Jump and Replica Island were some of the best our beloved OS could offer. While we still appreciate our humble beginnings, those days are long gone and mustached mercenary Guerrilla Bob is here to announce that - with his machine guns blazing.

An import from iOS, Angry Mob Games' Guerrilla Bob is a top-down action-packed shooter that pits a Rambo-like, cigar-chomping avenger (you guessed it, Guerrilla Bob) against an army of baddies ranging from terrorists to bulldozer-driving madmen. The game allows you the unique control scheme option of shooting with the capacitive back and menu buttons. While this won't work to your advantage on all devices (on an EVO, we were unable to shoot and walk at the same time with this control scheme) you fortunately still have the option to use only on-screen controls as well.

One surprising aspect to the gameplay is that firing your weapon is achieved with auto-aim. Perhaps manual aiming would have provided unnecessary frustration on a touchscreen, but not having any control over Bob's aiming does, in our opinion, take away from the enjoyment a little bit. 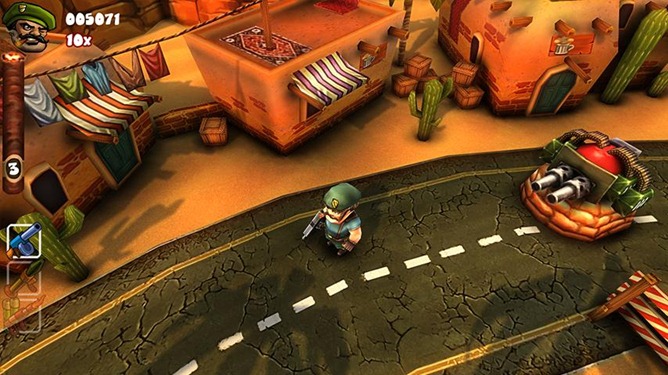 While there isn't any online multiplayer (yet) you can play locally over Wi-Fi with several other platforms. Android, iOS devices and Macs are all compatible for some Guerrilla Bob multi-player action. Did we mention that his co-op buddy is a Scottish, kilt-wearing, pipe-smoking mercenary? That's always worth some bonus points.

The graphics in this game are absolutely stunning, easily some of the best on Android. Sound is top-notch (and appropriately hilarious at times) though his catch phrases annoyingly get repeated many, many, many times (let's hope for more variety added in an update, shall we?). You can see Guerrilla Bob in all of his butt-kicking glory in the video below (the video doesn't exclusively show the Android version but it does portray fairly accurately what you can expect on Android):

One head-scratching missing feature is the ability to quit the game. You are forced to leave the game running in the background and wait for your Android system to end it (unless you have a task killer on hand). We don't see this as a deal-breaker and it isn't likely to hurt much of anything. Additionally the game has launched without any Apps2SD support. We hope to see both game-quitting and SD-installing added in a future update.

Update: V1.0.1 adds the Quit button as well as allows the downloaded data to be moved to your SD card.

Some relatively minor issues aside, this is one of the biggest games to come to Android and our thoughts are clear with this one: at $2.99 we highly recommend picking it up. Hit up the links below to do just that.

Thunderbolt LTE Speed Tests Are Rolling In - How Fast Are Yours?

Still Waiting For Froyo On Samsung Epic 4G And Transform? Circle Monday, March 21st On Your ...