Now that we know that the Wi-Fi-only model of the Motorola XOOM is just around the corner (launching March 27 to be exact) perhaps you are looking for the best deal on the tablet. Costco's website may be the place to look, as they are offering not only a $10 discount (from the listed $600 price tag) but they are also throwing in a free gel case and shipping it to you for free. Yes, all of that can be yours for a mere $589.99 and they are taking pre-orders now. The units won't be shipping until April 1 though, which is five days after the tablet is released everywhere else. In addition, amazon.com is now taking pre-orders on the same model. Their price is the standard $599.99 and you don't get a case, but you not only get free shipping, but there will also be no tax for most buyers - meaning the price that you see is the actual price you will pay.

for the Costco deal, you don't need to be a Costco member to order, though a 5% surcharge will be added for non-members, basically cancelling out the discount. There is no official word yet on availability and pricing of the carrier-free XOOM in Costco's stores (and their website's stock is often very different from their stores') but, as the Verizon model is currently in Costco stores at a similar $10 discount, we are betting the Wi-Fi XOOM will be there as well. 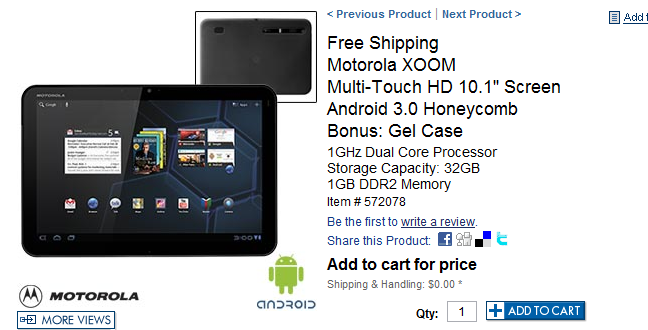 Source: Costco via BGR and Amazon via Droid Life