Site GLBenchmark showed a very interesting log of a phone, dubbed the HTC Shooter, checking in recently. As this is the device's development codename, the speculation is that this could be Sprint's sequel to the EVO - the EVO 3D - that we will likely hear about at CTIA next week.

As you can see in the screenshot taken below, the Shooter sports 960 x 540 (qHD) resolution (the same as the Atrix) and is running Android 2.3.2 'Gingerbread.' The model is listed as PG86100 and it is clearly setup for Sprint's network. 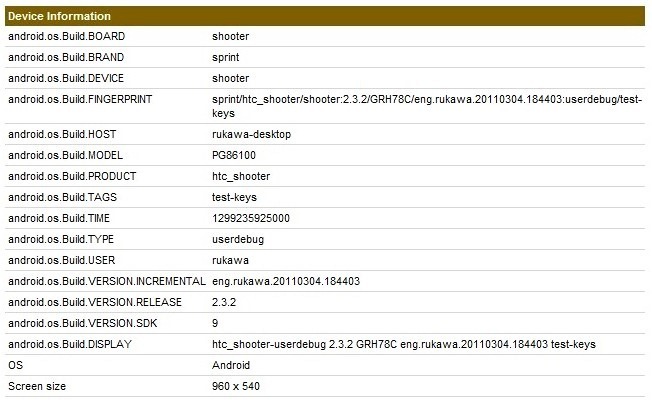 The phone also sports a dual-core 1.2GHz Snapdragon processor (probably - this is based on the known Qualcomm chipsets with the Adreno 220 GPU that the benchmark indicates) and looks to be nearly identical to the HTC Pyramid, renders of which turned up just yesterday.

As Sprint has already let us know that they have something exciting planned for us in Orlando next week, it's all but confirmed that it will be a sequel to the EVO. A rumor recently surfaced that the new phone that the network is set to unveil will be called the EVO 3D and we believe it's very likely that it and the Shooter are one and the same. Nothing on this log indicates said 3D capabilities, but we wouldn't expect it to. You can tune in on March 22 to find out all of the details from Sprint.

Source: Blog of Mobile!! via Phandroid

[Review] AutomateIt Allows Your Phone To Take Care Of Itself