A couple of weeks ago, word popped up of a UK site starting to take pre-orders for the Wi-Fi-only version of the Motorola XOOM, being available in early April. Not long after that images leaked of the same model showing up in a Sam's Club training center with a price tag of $539. Not to be outdone, yet another story arose saying office retailer Staples would be supplying the slate for $600 with employee training starting on March 23. Today the rumors take another step into becoming reality, as site B&H is now taking pre-orders for the Wi-Fi model of the Honeycomb debut for $599, making them the first American site (to our knowledge) to offer pre-orders on the carrier-free model.

This news should come as a relief for those that have been holding back from dishing out the $800 Motorola is asking for a contract-free 3G/LTE version of the tablet. We have seen an early pattern by Android tablet manufacturers of withholding Wi-Fi-only options until they have sold as many contract-laden versions as they can. In comparison to the Galaxy Tab (which still doesn't have a Wi-Fi version available), the time lapse between the 3G and Wi-Fi models of the XOOM is looking to be relatively small. 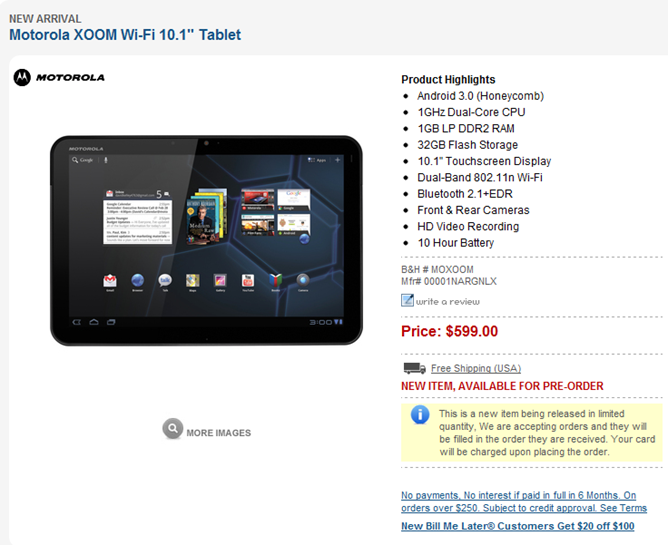 If the rumored price of $539 at Sam's Club was correct, that would be a significant savings over what now is shaping up to be the suggested retail price of $600, but before holding your breath for that one, please note that the Sam's price is unconfirmed and was merely plastered on a mock-up XOOM display in a "training store."

Want to reserve yours as soon as possible? You can head over to the source link to get your pre-order on. No release date is listed but we are still betting that PC World's "the first week of April" will likely be it.