The first thing you'll notice upon installing it is that there are actually two parts to the application that will be called by your device separately: The dialer and the contacts manager. That means that, when you want to make a phone call, it will take you straight to the dialer instead of the contacts manager which, while a simple concept, is a really nice and overlook feature of some other contact mangers. Now that we have that little factoid out of the way, let's look at sexy dialer pictures: 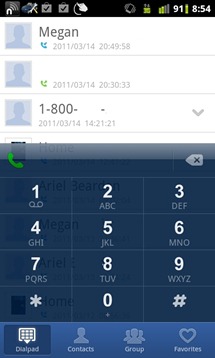 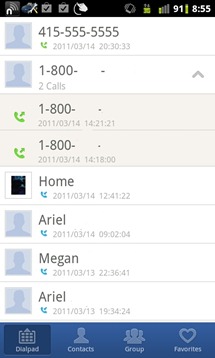 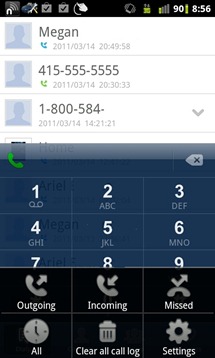 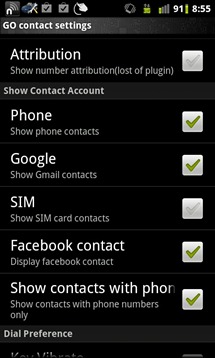 Here we have the main dialer. It is quick and responsive, but takes a little longer than I'd like to start up initially. It shows your complete call history and can do shortcut contact searching a la HTC Sense's dialer and, when you see a grey down-arrow to the right, it triggers a pull-down that shows your call history for that specific contact. Nice. If you hit menu, you can get to settings and call log filters. The settings are pretty standard but sometimes the English gets a little interesting. 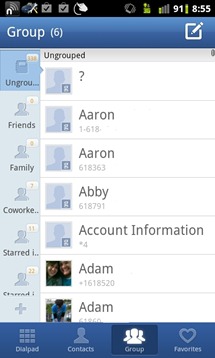 Next up is the groups tab, which is just plain sexy. I have noticed that sometimes (a few times, actually) GO Contacts crashes. [It crashes for Brad and Artem on a regular basis, but it works just fine for me. We all have EVOs -  Artem is running a Sense-based ROM, while I'm on CM7 RC2 and Brad is running CM7 nightlies. Based on Market comments, it's not a common issue.--Aaron] You can send a nice little bug report, but it is still a bit irksome. Like I said, though, it's been on the market just shy of 12 hours, so I'm crossing my fingers for a fix soon. 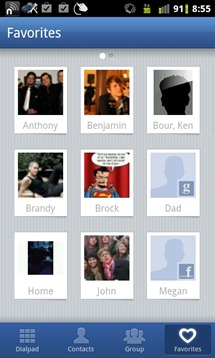 Finally, there's a favorites tab, which is also pretty good looking. It scrolls left and right and shows you larger images of your contact pictures with just first names underneath.

Overall, GO Contacts is a sexy and (mostly) smooth contacts manager and dialer. It has a good feature set and carries out its functions pretty well. I have noticed a lot of crashes in the short time I've had it installed though, so it would be great if you, the reader, could sound off about how well it's performing for you. You can grab GO Contacts right here for your favorite price:

[Poll] Now That The Thunderbolt Is Nearly Here, Will You Be Buying It?