Sprint's just announced that the upcoming Kyocera Echo will be released on April 17 and will sell for $199 (on a two-year contract, of course). Customers will be able to reserve the dual-screen flippity doo starting March 26.

The novelty phone sports two displays, each 3.5" with a resolution of 800x480. It has a 1GHz single-core Snapdragon processor and will run Android 2.2 Froyo at launch. While innovative designs are always welcome, an overhyped unveiling (featuring illusionist David Blaine) and ho-hum specs have led some to ridicule Kyocera's latest Android device long before its release date was announced. It has not exactly been the most anticipated smartphone around the Android blogs, so the announcement that "The Wait is Almost Over" in Sprint's press release is sure to draw a few guffaws. 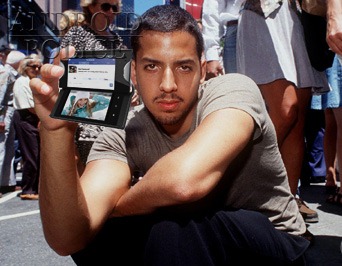 For those of you that are waiting to pass judgment, the full release is below:

"OVERLAND PARK, Kan. & SAN DIEGO (BUSINESS WIRE), March 14, 2011 - Sprint (NYSE: S) and Kyocera Communications Inc. today announced availability of Kyocera Echo™, the nation’s first dual-touchscreen smartphone, on April 17 in all Sprint retail channels, including the Web (www.sprint.com) and Telesales (1-800-Sprint1). The innovative Android™ device will sell for $199.99 (excludes taxes) with a new two-year service agreement or eligible upgrade*. Beginning March 26, consumers can visit www.sprint.com/echo to “Reserve Now” and be among of the first to get their hands on Echo.

“Continuing to set the bar high in Android innovation, Sprint is thrilled to bring this industry-first device to the market,” said Fared Adib, vice president Product, Sprint. “Kyocera Echo’s unique dual-screen, Simul-tasking™ capabilities allow customers to do things they have never before done on a wireless handset. We believe customers will really appreciate and leverage the dual-screen capabilities and are excited to partner with Kyocera to bring this innovation to Sprint customers.

Announced in early February, Echo already has received rave reviews from industry insiders. According to Boy Genius Report, “Kyocera Echo is unlike any other device we have ever seen, and it’s truly innovative.” Phonescoop also touted, “[Echo] is one of the most unique Android phones we’ve ever seen.”

Kyocera Echo features two high-resolution 3.5-inch WVGA touchscreen displays connected by a three-dimensional “pivot hinge” that enables the two displays to operate independently, side-by-side or combined to form an oversized 4.7-inch (diagonal) integrated display. The Super Copper Alloy hinge is so unique it has six patents pending, and so tough it has passed severe durability testing.

“The industry response to this innovative device has been overwhelmingly positive, confirming the need for a pocket-size multitasking handset with a tablet-like experience,” said Yasuhiro Ohishi, vice president of sales and marketing at Kyocera Communications Inc. “With the multitude of Android apps available for download, Echo is an ideal tool for today’s multimedia, multitasking lifestyles.”

Kyocera Echo operates on the Android 2.2 operating system and has access to more than 150,000 apps in Android Market™. Available at www.echobykyocera.com are videos showing Echo’s unique functionality and a complete look at the phone’s specifications and features, which include:

Sprint is offering customers a unique opportunity to reserve Kyocera Echo for purchase. Through the reservation process, customers will be able to reserve their devices online, pick them up in a Sprint Store, and receive the full retail experience, including Sprint’s Ready Now service. In addition, Sprint customers visiting the Echo site will also have the opportunity to win an Echo in the “Duel for Dual Sweepstakes.” Beginning March 15, customers can use their “sharp-shooting” skills to compete against others to win their first dual-screen smartphone. Customers can reserve their Echo for purchase at www.sprint.com/echobeginning Saturday, March 26, while supplies last. Customers who reserve Kyocera Echo will be able to complete their purchases beginning at 9 a.m. ET on March 26, and must complete their purchases no later than April 14 at 9 p.m. ET. The devices will be available for pick up on April 17.

Sprint Nextel offers a comprehensive range of wireless and wireline communications services bringing the freedom of mobility to consumers, businesses and government users. Sprint Nextel served more than 49.9 million customers at the end of 2010 and is widely recognized for developing, engineering and deploying innovative technologies, including the first wireless 4G service from a national carrier in the United States; offering industry-leading mobile data services, leading prepaid brands including Virgin Mobile USA, Boost Mobile, and Assurance Wireless; instant national and international push-to-talk capabilities; and a global Tier 1 Internet backbone. Newsweek ranked Sprint No. 6 in its 2010 Green Rankings, listing it as one of the nation’s greenest companies, the highest of any telecommunications company. You can learn more and visit Sprint at www.sprint.com or www.facebook.com/sprint and www.twitter.com/sprint.

Kyocera Communications Inc. (KCI) is the headquarters for Kyocera- and Sanyo-branded wireless products and accessories in the Americas. The company's devices are driving the convergence of telecommunications, broadband and multimedia. KCI was formed in April 2009 through the combination of Kyocera Wireless Corp. and Kyocera Sanyo Telecommunications Inc., two wholly owned subsidiaries of Kyocera International Inc. The former was created when Kyocera purchased QUALCOMM Incorporated's consumer wireless phone business in 2000, while the latter was formed when Kyocera purchased the wireless phone business of Sanyo Electric Co., Ltd. in 2008. Based in San Diego, KCI leverages Japan's history of creating advanced consumer technologies around humanism and respect for the environment and blending them with a Western entrepreneurialism and style, resulting in a unique design language and a natural, user-friendly interface. For more information, please visit http://www.kyocera-wireless.com or follow the company on Facebook at www.facebook.com/kyoceramobilephones.

Kyocera Corporation (NYSE:KYO) (TOKYO:6971) (http://global.kyocera.com/), the parent and global headquarters of the Kyocera Group, was founded in 1959 as a producer of fine ceramics (also known as "advanced ceramics"). By combining these engineered materials with metals and plastics, and integrating them with other technologies, Kyocera has become a leading supplier of telecommunications equipment, office-document imaging equipment, solar power generating systems, semiconductor packages, electronic components, cutting tools and industrial ceramics. During the year ended March 31, 2010, the company's net sales totaled 1.07 trillion yen (approximately US $11.5 billion). Kyocera marked its 50th anniversary in 2009, and the 40th anniversary of its U.S. operations. It is ranked #554 on Forbes magazine's 2010 "Global 2000" listing of the world's largest publicly traded companies."