If your Apple fanboy friends (surely you have at least one somewhere) like to taunt you with the old "iOS has more apps than Android" spiel, then you may not have to grudgingly agree with them for much longer. Business Insider published data this week that shows the Android Market's number of apps continuing to rapidly approach the amount of apps in Apple's marketplace. While the Market's trailing of the App Store by 100,000 applications would not, at a casual glance, appear to be encouraging, the rate of growth is clearly in Android's favor. In October that same gap was 185,000. BI actually expected Android to have caught up by now, but they still see that happening within the next few months. 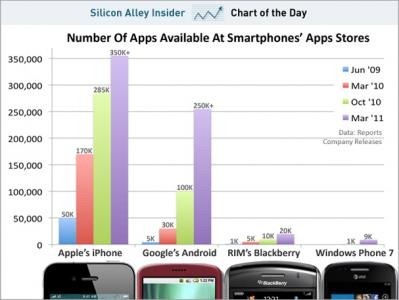 Another chart from the same source shows some not so encouraging news for Google's OS stacking up next to Apple's. Among potential tablet buyers surveyed in February, a ridiculously high 82% say some version of the iPad is the one they are targeting. The XOOM falls way behind at 4% with the Galaxy Tab at 3%. The pricing of the Android tabs surely can't be helping there, not to mention the fact that the iPad had a year's head start on the new XOOM in the eyes of the public. Still, it does show that Apple is likely to continue dominating the tablet market in the short term. 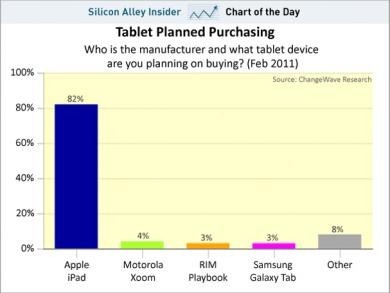 Sprint Says "The Wait Is Almost Over" For The Two Guys Awaiting The Kyocera Echo - Launching ...