Even though SwiftKey has always been my favorite keyboard in theory, I've never been able to truly make the move from the HTC keyboard on my EVO to it for one reason - it didn't have arrow keys exposed on the main screen. Prediction was also about the same - sometimes worse, sometimes better, so I stuck with the HTC stock offering, giving SwiftKey's new versions a try here and there.

Everything changed with the new beta that was just sent to VIP members (if you are one of them, you can grab the download link from here). Not only is the new prediction engine much better than before, but there is finally a checkbox in the options for arrow keys that users without trackballs need so badly. They occupy an extra row, while keeping the layout the same, so it gets a little tall, but it is fine by me - SwiftKey is finally turning into exactly what I've always wanted my keyboard to me (suck it, iPhone keyboard).

Speaking of the latest predictions, they are magnificent. I can mash the keys with the accuracy of a 2-year-old trying to play piano, but the text still makes perfect sense. Because it uses statistical analysis for predictions, rather than just a dumb dictionary, the chances of SwiftKey knowing what I'm trying to say are much higher than with any other keyboard. In case you didn't know, the company was actually primarily started to develop a smart prediction engine and only then sidestepped to introduce a keyboard as its first customer-facing implementation of its technology.

Check out the screenshots I took below - all of this was typed in the fastest manner possible, and I only caught one mistake. And at the end there, because it analyzed my SMS texts and previous corrections, it just knew what I was trying to say. This thing is alive! 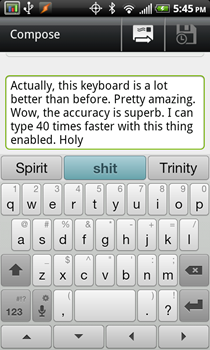 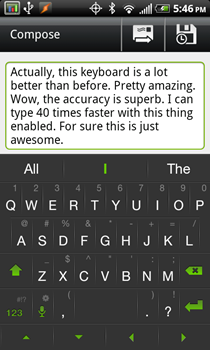 If you are not a SwiftKey VIP, you will have to wait for the beta to reach a stable enough state to be released in the Market. In the meantime, enjoy the current version, available below:

[Update: Rooted? Roll Back To Stock] First Motorola XOOM OTA Update Will Prepare It For The ...