Having been available for some time as both a desktop browser extension and an iOS app, Feedly sports an extremely simple interface and syncs with your Google Reader account. Rather than presenting a text-only list of headlines, you get a full-screen view of your first item, complete with pictures, headlines, and the very beginning of the post. You can then either tap on the feed for the full article (at which point it basically becomes like any other RSS app) or swipe to the left to move on to the next headline. Icons for marking an article as read and refreshing it lie below. Articles can, unsurprisingly, be shared via email or tweeted to your followers. 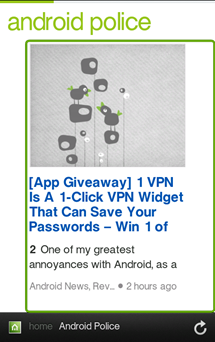 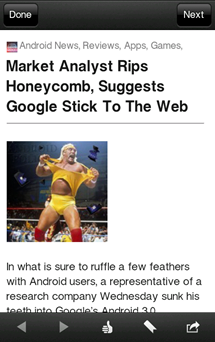 However, since the app is still in beta status, there are a few limitations. It is optimized for phones and 10" tablets, but support for 7" slates like the Galaxy Tab or Nook Color won't be arriving until April. I found the interface to, at times, be almost too simple (dare I say iPhone-esque) in that something as obvious as viewing read items wasn't immediately apparent amidst the barebones cleanness of the UI.

While an RSS app like Pulse seems to be going for maximum visual appeal, and the official Google Reader app strives for the efficient delivery of information, Feedly appears to be attempting to carve its own niche somewhere between the two. Too striking to be a text-based RSS app, but falling just a little short of being considered eye candy, Feedly is perhaps more magazine-like in appearance than anything. It hasn't become my RSS reader of choice, but at the price of free, I think it is well worth checking out in the Market.

Ticketing Marketplace StubHub Gets Punched Into The Android Market