It appears that a major glitch like the recent SMS bug can help spur on support even for an ancient (in Android years at least) phone. The original Motorola Droid will start receiving an OTA update today, sporting several crucial messaging-related bug fixes. Update FRG83G brings the Droid's Froyo version up to 2.2.2.

Released over 16 months ago, the OG Droid has actually been fairly well-maintained by Moto, launching with Android 2.0 'Eclair,' and now running an updated build of Froyo. In addition to several property space exploits (like rageagainstthecage) that were patched with 2.2.2, the SMS-related changes to this update include: 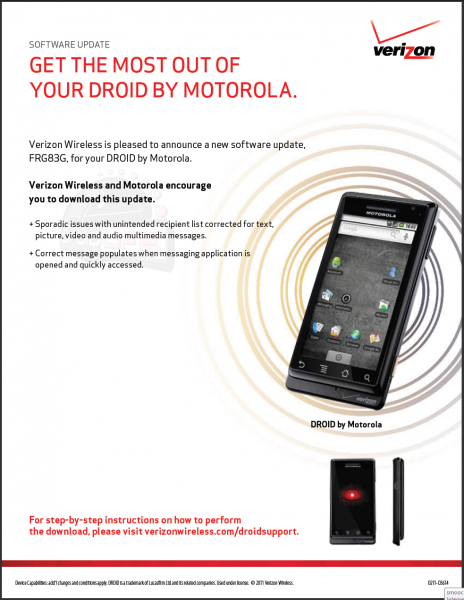 While this may not be the Gingerbread update some have been hoping for, there is always CM7 for that, right? If the update hasn't arrived automatically, you can check for it by opening Settings>About phone>System updates.

Love For Android! Portions Of $100 Million Fund Set Aside To Help Indie Devs Port From iOS To ...