In an internal memo leaked from SCK (the Radio Shack subsidiary that sets up wireless kiosks at Sam's Club) it appears that the Droid X2 is on its way very soon, and it may not be much of an upgrade over the original. The note to employees says that kiosks can expect to see the Droid X2 (which showed up at the FCC recently) "this week."

So surely Motorola's sequel is an exciting upgrade over the original, right? Well, according to the memo, it will sport a 2GB SD card and sell for the same price as last year's version. As the current model now ships with a 2GB SD card as well (unlike the memo, which has the old information of it shipping with a 16GB card) that leaves us to figure out the rest of the changes. It most likely will sport a Tegra 2 dual-core processor and a qHD display, but otherwise appears to be an incremental upgrade. Here's to hoping that Moto has thrown in something else (front-facing camera? more internal memory?) to further justify the upgrade. 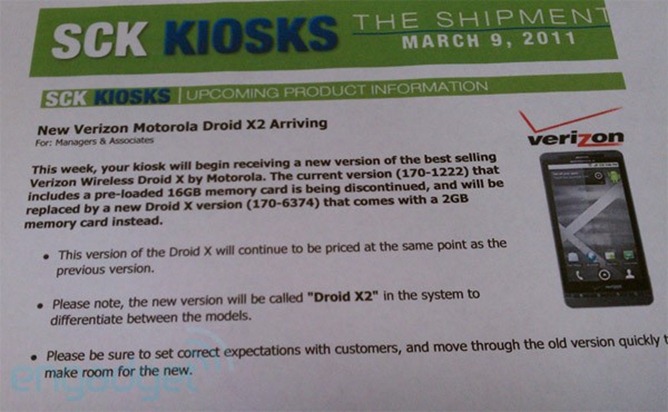