With cell phones being so completely immersed in our daily lives that many of us can hardly remember a time when we didn't use them, home phone lines have increasingly gone the way of the dodo. With monthly cellular bills that frequently top $100, having another expense for something that is deemed largely unnecessary just doesn't compute. Innovative communications company Teltub is attempting to bring back the home phone line by using Google Voice to give users home VoIP service for a mere $5 per month.

The service, which launched in January, requires a Google Voice number, an internet connection, and a VoIP adapter (no computer or phone line of any kind required).  The adapter can be purchased separately and setup using gHome's tutorial, or you can pay $50 extra to have them provide it for you. The five smackers a month gets you unlimited calling to the US and Canada. 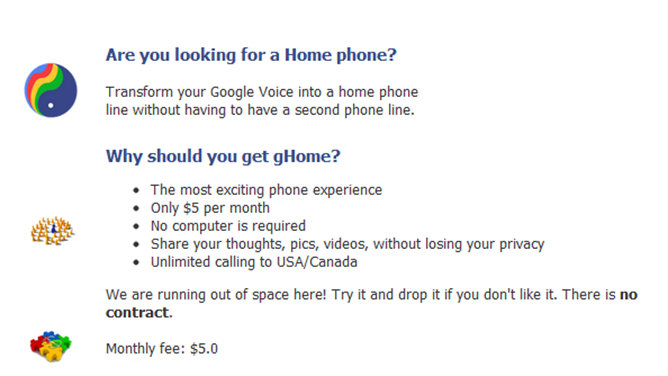 While home VoIP lines have existed for some time now (hence the market for VoIP adapters), this is the first service I have seen that attempts to put it all into a ready-made package that does not require extensive technical expertise to use. Of course an adapter and a Google Voice account can hypothetically get you home VoIP without even needing gHome's help, but it would require using a service such as Sipsorcery (which is no longer open to registrations) to bypass Google's callback requirement. gHome eliminates the complicated middleman that could easily intimidate 99% of customers.

You can check out Teltub's promo video below and visit their site for more information.

Apple Envy Begone! Pocket Legends Is More Profitable On Android Than On iOS