Opera Software, makers of the popular browsers for desktops and mobile devices, today unveiled a mobile storefront for web apps called the Opera Mobile Store. The store, which racked up 15 million users during its February beta release, is available now on Android (as well as several other mobile operating systems).

Applications will be purchased, installed, and run via Opera's mobile browsers (Opera Mini or Opera Mobile). Opera's store is powered by web app company Appia, whose storefront commerce system will be used for payments. An Opera Publisher Portal, a platform for developers to create and dispense their apps, was released simultaneously. 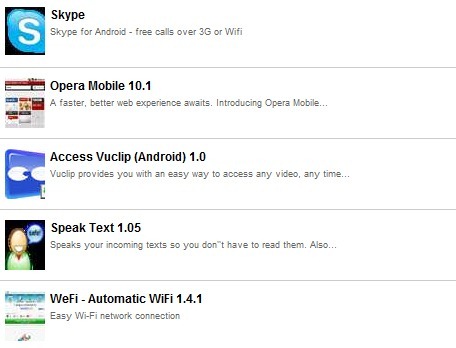 Mahi de Silva, EVP, Consumer Mobile, Opera Software, said "The launch of the Opera Mobile Store supports Opera’s core belief in an open, cross-platform mobile Internet experience by providing Opera users with an integrated storefront of mobile applications. Our partnership with Appia delivers to all Opera Mobile and Opera Mini users easy access to a wide variety of great content, on any device, all over the world.”

In addition to Android, the new storefront is available on Blackberry, Windows Mobile, Palm, Java, and Symbian platforms (iOS is notably missing from the bunch).

While web apps may not be the first thing an Android user scrambles to install on his phone, Android users tend to like options and another outlet for developers to give us the goods certainly can't hurt.

Google Squashes A Potentially Serious Bug In The Android Market

Want A Google Voice Home Phone Line? Teltub Will Do It For $5/Month With gHome