Foursquare may be the king of the check-in game (they're boasting over 7 million users and over 500 million check-ins last year), but that won't keep them resting on their laurels. Launching tonight on the Android Market, Foursquare 3.0 will introduce several notable changes that could fundamentally alter how the service is used.

Foursquare founder Dennis Crowley explains that, because of the effort put into scaling the service for such a wide increase in users, they haven't been able to innovate and improve it as much as they hoped. But the update to version 3.0 should change that, by making use of every check-in:

One of the big ideas kicking around foursquare HQ these last few months has been the idea of “every check-in counts.” Regardless of whether you’re checking into the same ol’ coffee shop or some far-away beach, we want every check-in to add value to every foursquare user.

The idea of making every check-in count will have a direct impact on the user, thanks to the new Explore tab. Think of it as an improvement to the stale old search feature, but augmented in its usefulness by several factors, including how popular it is with other users and how it relates to places you've already visited. 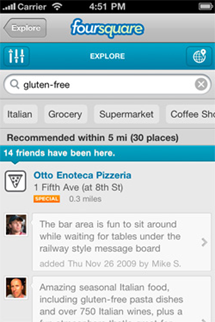 The next big change will come in the form of a totally overhauled leaderboard. Instead of calculating the number of points for users and resetting every week, the new version will feature "a sliding 7-day barometer of you and your friends." This will not only make the leaderboard more social, but will be another factor in helping users discover new places. 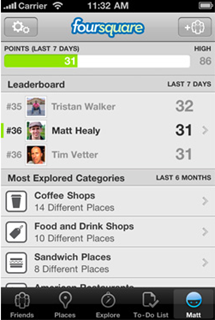 And last but not least, an improvement on the old Mayorship system. Instead of promoting fierce competition (not to mention cheating), merchants will now be able to offer deals and promotions to a variety of groups.

Business will now be able to offer Specials to swarms, groups of friends, regulars, newbies, Mayors, or simply to everyone. And, on the Places screen in the app, you’ll now see a list of all the Specials nearby, so it’s easier to find places that reward foursquare users. With over a quarter million businesses verified on foursquare, these new tools will mean more rewards for users everywhere in the world.

This will definitely be a welcome update when it becomes available tonight, and should win some new users over as well. With Google getting involved, the check-in game is getting awfully competitive, but Foursquare won't be backing down any time soon.