The latest in a string of rumors about the upcoming Wi-Fi-only version of the Motorola XOOM comes from the team at Droid Life, who say that the carrier-free model may be hitting Staples stores on or around April 3. The same folks are also now reporting another leak from Staples which shows that employees will get the slate in their hands to begin training on March 23.

This dates come from a tip offered up by a Staples insider. Take it as you wish, but this would be consistent with recent postings from UK site PC World, citing early April as the availability date for the UK market. Presumably, Moto would launch the device in its home market, the US, before sending the WiFi XOOM abroad.

No price is referred to this time around, but a leak from Sam's Club last week floated a $539 mark for the wholesale retailers' stores.

While it's still all unconfirmed, a series of separate rumors are shaping up to paint a picture that perhaps those itching for a Wi-Fi model of the XOOM may not have as long of a wait as we had feared. If these rumors of an early April release hold true, will you be among those lining up? Be sure to let us know in the comments below. 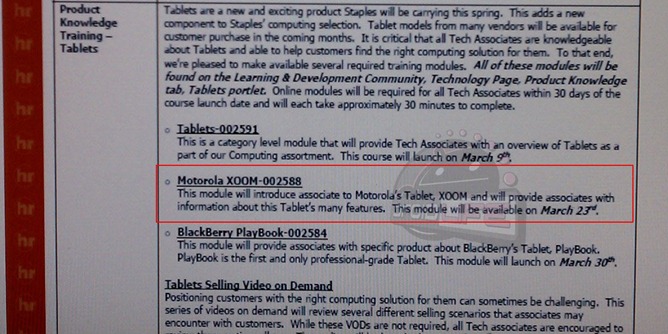 You Voted, We Tallied: Your Top 10 Favorite Android Apps