An interesting little tidbit came across to us in an otherwise ordinary posting on Amazon's app developers' blog. While developers will have the option to use DRM or not in their apps, those that do use the digital licensing service may present problems for those users who are temporarily without an internet connection.

Comparing it to the way Amazon currently handles the storing of Kindle books, the curious part of the post reads:

While the words "every time" are not specifically used, it seems to imply that a DRM check will be sent whenever you open an app. The question this raises is whether that check can be done from a locally stored license (after the first installation) or if it needs to contact Amazon's servers every time the app is opened (similar to a protected song on iTunes). Say you're taking a weekend trip, driving through the country (without a data connection), and your passenger wants to play Angry Birds which was purchased from Amazon. Will she be able to? Or will it fail with an authentication error? 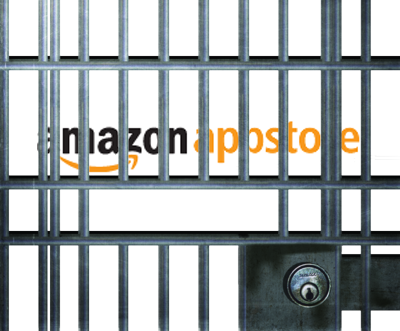 The answer to this question remains unclear, and we have attempted to contact Amazon's app developer wing via Twitter for a response.

While we understand the need to protect developers against piracy, Amazon will want to be very careful with the restrictions they put on their apps. If users sense a more restrictive experience than they get with Google's Market, this new vending rival could be dead in the water from the very beginning.

Update: In response to the concerns raised here, Amazon posted the following clarifications, which definitely tone down their previous language quite a bit:

"In response to your questions, we’d like to take this opportunity to provide a few clarifications.

Do I have to use Amazon DRM if I sell my app through Amazon.com?

No, it is not required. When you submit your app you can choose to offer your app DRM free or you can apply Amazon DRM.

Do customers need to have internet access to use an Amazon DRM-enabled app?

No. Once an app is installed, a user can use the app without having internet access.

How can you verify that the user has an entitlement to the app without internet access?