Google even has a page for developers and copyright holders to submit DMCA takedown requests for apps on the Market. Google's form guides you through what information is needed, and how to identify the apps in question - really, it makes the whole process quite simple.

So how do we know Google is dealing with these issues? Our favorite tech giant has made all the copyright (DMCA) and trademark infringement notices it has received as a result of content on the Android Market (see here) publicly available. ChillingEffects recently translated this data for the month of February into a handy visual representation: 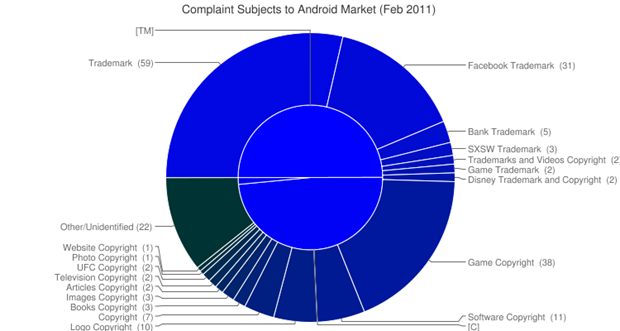 The most prolific complainants? Facebook and Nintendo. Facebook sent 31 trademark infringement notices to Google in the month of February alone - mostly for illicit use of the "F" Facebook logo in app icons, as well as the Facebook name in the titles of apps. Nintendo's complaints were focused on a number of games that closely imitated the "look and feel" of  "Super Mario Bros."

Halfbrick Studios, developers of the popular game "Fruit Ninja", sent a DMCA notice to Google for the app "Fruit Slice," which has since been pulled from the market. It doesn't take a rocket scientist (or a federal judge) to see the why, take a look at this comparison of the two: 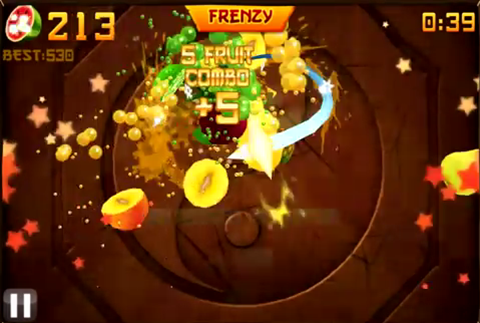 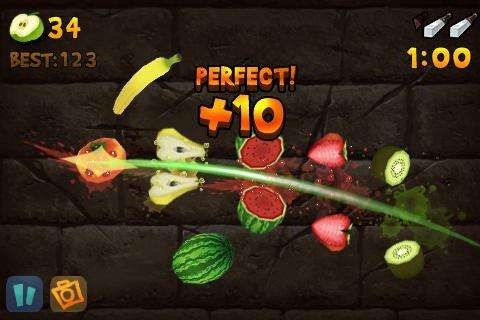 Having never played the game myself, I would be unable to tell which is the fraud. These copycats aren't amateurs, that much is certain. But, this seemingly "duh" matter isn't so clear-cut: the developers of the slightly less-citrusy clone responded with a counter-notification to Google. If the counter-notification was properly submitted, Halfbrick now has 10 days to notify Google that it has filed a suit against the infringing developers or Google. If Halfbrick fails to do this, Google must reinstate the app or face the potential for liability to the developer of Fruit Slice.

As a practical matter, Fruit Slice won't be coming back into the Market, most likely. In their counter-notification, the app's China-based developers basically said that Halfbrick doesn't own the concept of slicing fruit. Also, their game uses a soldier instead of a ninja. Right. Some US courts have recognized the existence of a copyright interest in protecting the "look and feel" of the audio-visual aspects of software, and I'd say this is a pretty obvious example of such an illicit copying. Some of you may be familiar with a similar situation that unfolded almost 25 year ago over a certain video game.  Interestingly, the Fruit Slice devs adamantly assert that their game contains zero copied code, audio, or graphics from Halfbrick's game.

On a related note, the "Cut The Rope" clone "Rope Cut" has also mysteriously vanished from the Market (when exactly it was pulled, I don't know), probably under the same reasoning for asserting infringement.

It seems like Google is trying to tackle the infringement monster, but a monster it remains - and the more Android grows, the more attention it will attract from those who would seek to exploit the success of others for profit, or malice.

[Updated] App Preview: Friday Is Your Very Own Personal Assistant