Prev
Posts in the last
24 Hours
sorted by
Hottest
Next
Update: We have been notified by the developers of this app that the app does not upload any information. The information is kept on the phone and organised by the app. In the future there are plans to implement a feature that would allow the information to be uploaded to a backup server. However, at present, information collected by Friday is not shared with anyone including the developer.

Each day a smartphone user receives information from a variety of different sources, including phone calls, text messages and emails. Keeping track of it all can be a major headache and more often than not we misplace crucial pieces of information because we are unable to recall when we had received them and/or what we were doing at the time.

A new app called Friday, by developer Dexetra, alleviates this problem by placing all the relevant data at your fingertips. Friday does this by cataloguing everything you do on your phone and then displaying it in an easily digestible format. Furthermore, it allows you to search through all the data and pinpoint the specific information you are looking for.

Unfortunately, explaining the features and use of Friday is very difficult without actually using it. At first glance the app feels like a fairly standard smartphone stats counter, however this is a gross oversimplification of Friday's functionality. For example, instead of simply informing you that you made 100 minutes worth of phone calls, you can actually see a graph displaying when you made your phone calls and their duration. More interestingly, Friday allows you to filter data by doing searches like "calls on 1 March", which would filter only the calls that were made on the device on 1st March. 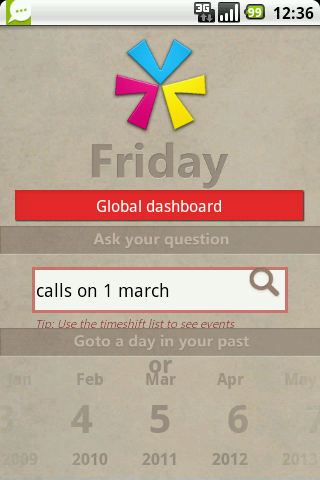 One of the founders of Dexetra describes Friday as a "life search app" helping you "recollect what [you] did on any particular day of [your] life". This is quite a broad statement and right now Friday can only help you recollect the following pieces of information: 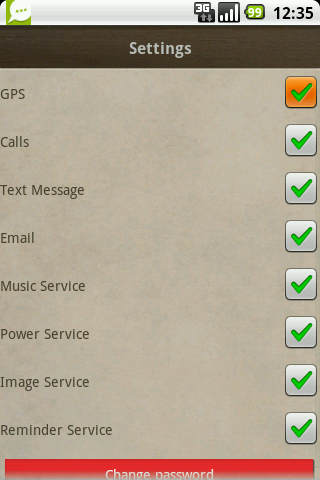 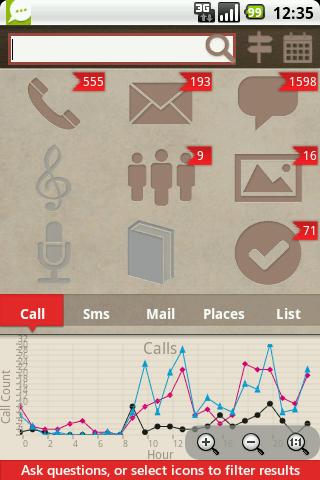 Once you click on one of the icons to filter a specific type of information, you will see a number of useful graphs showing you how much you have been using the device. One of the things Friday has going for it is its slick user interface. After I had played around with the app for a little while it was easy to figure out what all the different buttons were for and how to find the information I needed. There are still some things that require further explanation and the developer has acknowledged that this is an area that needs to be worked on.

The list of filters appears to cover most of the pieces of information your device is likely to receive on an average day. Hence, you can do searches like "calls from Jon on 2 March" and all the calls from your contact "Jon" on 2 March will appear on the main screen. This is a great way of finding information that dissects multiple types of data. Apparently, you can even do searches like "calls while listening to Lady Gaga" and all the calls that you had while a Lady Gaga song was playing will be displayed.

Finally, you can add notes, tags and reminders to further categorise the information on your phone. For example, if you were to take a lot of photos during a holiday, you could have the app auto-tag these photos. 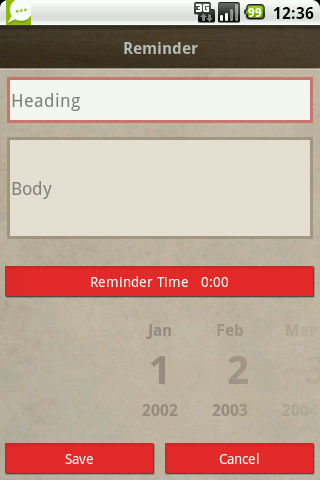 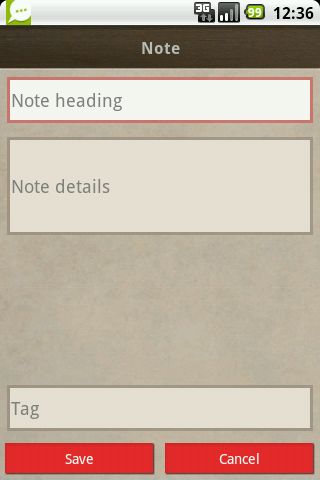 Firstly, you need Friday on your phone for at least a week before it actually becomes useful. After the initial run where it syncs all your contacts, events and reminders, Friday will periodically sync all new events that happen on your device. Essentially, everything in the list of filters will be categorised into the app.

Unfortunately, for Friday to stay up to date it needs to constantly sync everything that happens on your device. So, every time a SMS message is received  Friday launches and sync the message almost immediately. This constant synchronisation can be a major drain on the battery and after a week of usage I noticed that my battery was dying a lot faster. This is clearly something that needs to be worked on.

On a more practical note I have found that aside from certain specific cases I do not see how this app can be useful on a regular basis. Certainly, if I want to look at how much I have been calling a particular contact, Friday comes in handy, but how often would I do that? Similarly, how often would I want to know who I called while a particular Lady Gaga song was playing?

In fact this app reminds me a lot of the Wolfram Alpha search engine which was touted as a potential "Google-killer". Similar to Friday, Wolfram Alpha indexes a variety of information and then displays "answers" to your specific queries. This sounds great in theory, however not many people have been able to find a practical use for it on a daily basis.

In any event, despite this, what sets the app apart from the standard Android apps is the wonderful though that the app developers have put into its design, font and icon choices. Android apps are often belittled for their perceived tackiness and it is nice to see app developers come up with visually and aesthetically pleasing apps.

The app is currently in the alpha testing phase and is invite only. Head on over to the developer's website to request an invite to test the app. You can also download the app from the Android Market, but it will not work without the invite.

The War Against Infringement On The Android Market Is Heating Up: Fruit Ninja Clones And More