With the wave of Tegra 2-powered phones and tablets that is already on its way, there lay a potential of a fragmented Android Market: those apps that require NVIDIA's new dual-core processor, and those that don't. Frustrating time spent searching the Market in vain could have loomed on the horizon. Thankfully, somebody was thinking ahead, as the Tegra 2 search engine Tegra Zone has arrived to help avert such confusion.

Tegra Zone gives you every Tegra 2-specific game in one place, including all the showcasing one would expect (screenshots, HD videos, etc.). While the app will become more and more useful as time passes (and more Tegra apps and devices hit the streets), there is already a burgeoning library in the making, including: Dungeon Defenders, Samurai 2, and a newly optimized version of Fruit Ninja (dubbed Fruit Ninja THD). Those with a new XOOM, LG Optimus 2X, Atrix 4G, Notion Ink Adam, Viewsonic G-Tab, or other Tegra toys who were hoping to flex their new devices' muscles a little bit can check out the link or QR code below to start your collection. 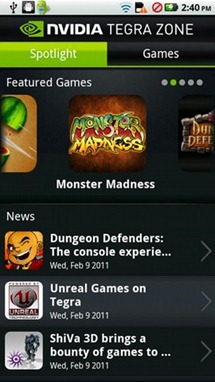 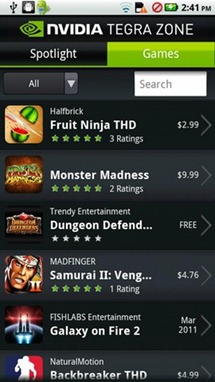 UK Version of Wi-Fi-Only XOOM Now Has A Price