While rooted Android users have been taking screenshots on their phones for a while now, stock, non-rooted owners have been left out of the fun (there are some notable exceptions to this rule, like the EVO 4G). No longer, according to Paul O'Brien, one of the visionaries in the Android community, who posted the following in reply to Cyanogen (aka Android god): 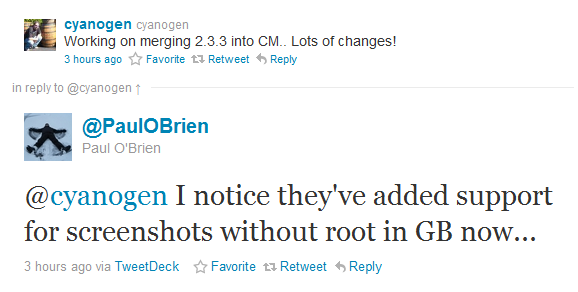 We haven't been able to confirm what exactly changed in 2.3.3, but according to Android Central, screenshots are now possible without root "because of some changes in the way the SurfaceFlinger service handles what it captures from the framebuffer."

This newly uncovered fact means that all phones running Android 2.3.3 and above should be able to take screenshots regardless of whether they're rooted or not.

To be clear, this doesn't mean Google has implemented screenshot-taking functionality in the OS (at least not yet), but it does mean that users will be able to download screenshot-taking apps that support this method from the Market and use them without having to engage in any tinkering first. The question is, which app will be first to the finish line?

[Hands-On] Chomp: A New Hope For Finding Apps On Android