You've seen it: a new Android tablet is featured on some mainstream media's program or website, and you know it's coming, but you still can't help but clench your sphincter muscles just a little when you hear it...

Will it be an iPad killer?

Samsung's attempt to compete with the iPad...

The latest inferior and insignificant non-Apple offering that we're forced to cover...

Can't they see that this is like describing Colin Firth as a wanna-be Tom Cruise? After a while, you begin to wonder if these journalists have actually used an Android tablet. Do they even know what it is they're missing?

I once owned an iPad, and it is not at all a bad tablet. It does what you would expect an Apple product to do. You get their massive collection of apps to choose from. It plays a mean Plants vs. Zombies and Netflix, neither of which have made their way to Android yet. Kudos to Jobs and company for creating another polished, market-changing device that appeals to the masses.

But after three months with the magical and revolutionary device, I started to realize that the screen looked kind of pixelated. Then I looked at the selection of apps and realized they were all slightly higher resolution iPhone apps, and at 5-10x the cost. Despite the massive biceps I was building from holding the heavy slab every day, I saw the light and switched to Android. 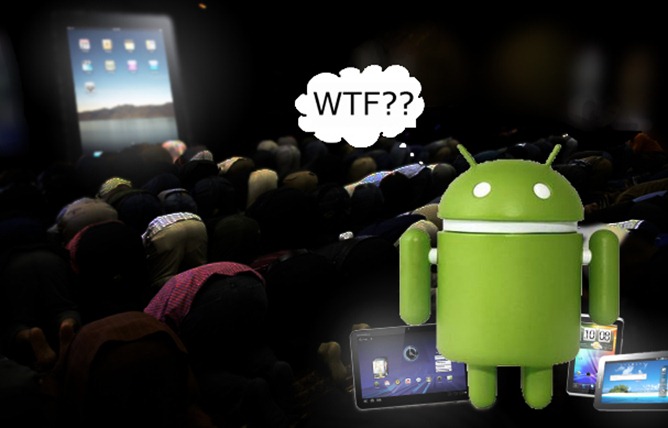 Once you are used to Android, picking up an iOS device is like looking back at an ex that you can't believe you ever dated. Among the "how did I ever live with that?" aspects are:

Do I think the Galaxy Tab is a much-better tablet, despite being a smaller model? Yep. Do I believe that the Nook Color, an eReader that the development community has nurtured like a lost puppy, is a superior choice? I am probably in the minority with that one, but I actually do. Do I wholeheartedly believe that the Motorola XOOM, and the upcoming 10.1" Galaxy Tab and LG Optimus Pad will all wipe their tablet backsides with whatever Android features Steve Jobs "invents" for the 2nd iPad? Of course I do!

Now, I work for Android Police, not an Apple fanboy site, so if I weren't naturally biased towards Google's OS, I would be in the wrong place. But I'm not complaining that an Apple site treats the iPad as if it were Hulk Hogan wrestling that guy with the mask on Saturday afternoon WWF, I am talking about major news and tech outlets that don't specialize in any one product or platform. Unlike me, they are actually expected to be somewhat objective and fair.

So what is driving this mass delusion that, almost a year after its release, Apple still has the best tablet on the market? Let me think, what do we value more than just about anything? Oh, I know, money!

Yes, the iPad has been extremely successful in terms of sales. It started off better than expected, kept sales up, and made a killing during the holidays despite already being a relative dinosaur in tech product years. Granted, there were 6 months where it had practically zero competition, but, in fairness, it has outsold the Galaxy Tab and lesser Android contenders by a gargantuan margin since they hit the scene. The XOOM generated a lot of buzz this week, but even I have to admit that it hasn't rivaled anything like the iPad fever that we will surely see in the next month or so (Motorola's $800 price tag doesn't help in that department).

But at what point does the tail start wagging the dog? Your typical customer probably doesn't want to research specs and reviews for the 10 highest-rated tablets on the market. No, he is (consciously and unconsciously) influenced by what he hears the most about, and that would be the iPad. So you have this chicken/egg scenario that only ends in Steve Jobs' wallet.

Will the cycle ever be broken? Will there be a day when the common perception is that the iPad is merely one option among many for tablet buyers?

While the iPad is likely to remain the top-selling tablet for at least a couple more generations (if not much longer), I think the conversation will change, albeit slowly. This tablet door has just been opened. I predict that we will see some very early chinks in Apple's armor of invincibility within the next few months. You could even argue that the XOOM has already begun that process. If the rumors of the iPad 2's relatively ho-hum specs are correct (especially the one that says its display resolution will be the same as the first gen unit), it won't be able to help but draw some mehs from at least a few next to the stampede of dual-core, Honeycomb-running Android tabs that has already commenced.

History can also lend some perspective: while Apple is often quick to the punch in marketing new computing products to the masses (personal computers, laptops, touch-screen smartphones), they don't usually remain the undisputed king for long (mp3 players being an obvious exception). I expect that pattern to hold with tablets as well.

So you can grab a cup of coffee, sit down, and relax your sphincters: the iPad Killer label will likely soon be killed. As more and more Android tablets outperform the iPad in nearly every category but sales, it would be nothing short of a crime to pretend that they are mere supporting characters to this diva whose clock is ticking.

Motorola XOOM Gets Overclocked By SetCPU To 1.5GHz, Bends Space-Time