It's amazing how quickly the developer community gets to work after a new flagship device is released, and the XOOM is clearly no exception. First, ClockworkMod developer Koush managed to get CWM up and running on the tablet 2 hours after he picked it up, and shortly after, he released root instructions.

Now, SetCPU developer Michael Huang has pushed the Tegra 2 CPU in the XOOM up 20% to 1.2GHz. At that speed, it manages a score of 40.716 MFLOPS while still working perfectly. The caveat? Linpack is a single-core benchmark, meaning that one of the Tegra 2's cores goes unused. (By comparison, my EVO on CM7 nightlies manages around 39 MFLOPS at 1.13GHz after caching.) 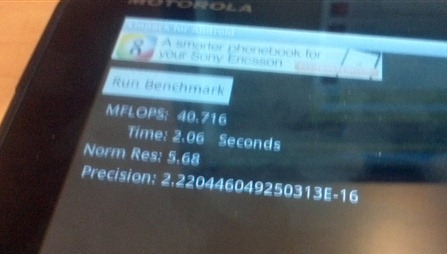 It's not really be a major surprise to hear that the Tegra 2 can hold its own, but things should really heat up once its competitors (the OMAP 4430 found in the LG Optimus 3D and the Exynos 4210 found in the Samsung Galaxy S II) come around.

Is Two-Hour Battery Life Holding Back The Thunderbolt Release?

Add Some Sense To Your CyanogenMod 7 With The NTSense Theme