Well, another day, another HTC Thunderbolt rumor. Today's addition to the Thunder-rumor-dome is a little different, but don't worry - it's still pretty upsetting. A new Best Buy Ad has shown up with an advertised price of $299 for Verizon's debut 4G handset. Yuck. The Android Police team already thought $249 was a little steep, but $300 for a phone based on a platform that's been around more than 4 months worldwide? 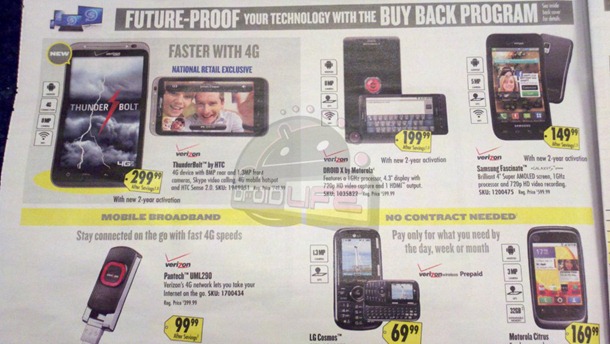 Along with that, there's some delightful speculation about the Thunderbolt's release date having been pushed back to March 10th (which now seems fake). Hats off to Verizon and Best Buy for the best ongoing smartphone troll of all time.

Some have speculated that this could be due to a trademark fight between Apple and Verizon over "Thunderbolt", but a quick check of the USPTO reveals Verizon holds the trademark for the Thunderbolt name, so that's unlikely.