Google's upcoming I/O conference generated quite a bit of commotion earlier this month when all of the tickets offered to the public sold out within 59 minutes in a messy mash-F5-to-get-through-the-crashing-servers rampage. In fact, it got so ridiculous that at first Android Police ended up with no tickets of our own either (don't worry though, I will still be there to provide coverage).

Considering most of the public attention at the conference will be concentrated around Android, it is pretty incredible just how popular it became since last year, when tickets were available for 50 days after going on sale. Whether this year's attendees are after an inevitable prize that historically comes with each ticket (a free phone 2 years ago and 2 free phones a year ago) or are really interested in Google's technologies is unclear, but what is clear is the desperation around making it to the event.

Now, some bad news for those who couldn't get in on the day of the sale: taking a quick look at eBay's completed auctions, we found this today:

The few tickets that are still available for sale seem to be just in high of a demand as the ones that have been already sold: 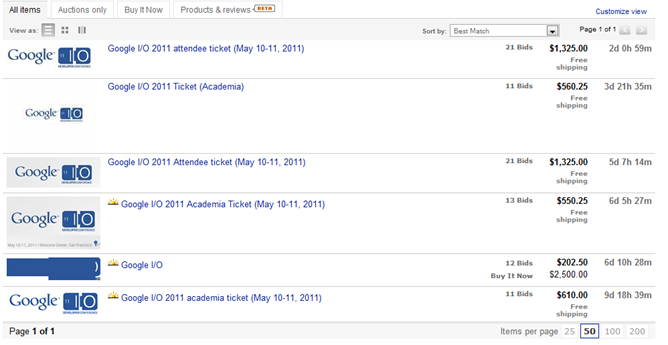 To say that your chances of getting through if you haven't already are looking to be pretty slim would be an understatement.

I have no good way of concluding this post, so I'll just say this: for those who are not making it, Google will be broadcasting both days' keynotes live. Videos of the sessions should also be available shortly after the conference.

And finally, here's to hoping that next year, Google will replace the wimpy Coldfusion-based ordering system in favor of something powered by their own technologies, like the App Engine, so that those of us who are there from the first minute to claim the ticket actually get it. How about that, Google?

Wirefly Unboxes Motorola XOOM: "The Next Generation In Tablet"