One of the things that got me really excited when I bought my first Android phone was the ability to import the numbers and email addresses of all my Facebook friends to my contact list automagically. No longer did I have to look it up on the Facebook webpage or, God forbid, call them and ask. 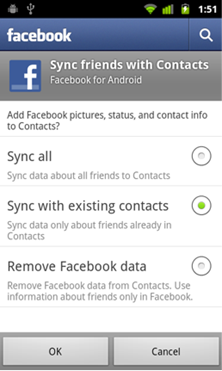 With the Gingerbread update for the Nexus S, Google has disabled this feature. While you can still look up your friend's number in the Facebook application, the option to sync their data with Android's Contacts app will no longer exist. In a statement released today, Google claims that the inability to migrate contact data from Facebook's servers to Google's creates a  "false sense of data portability" and justification for their decision to remove the service.

Here is Google's statement in full:

We believe it is very important that users are able to control their data. So in the over-the-air update for Nexus S, we have a small change to how Facebook contacts appear on the device. For Nexus S users who downloaded the Facebook app from Android Market, Facebook contacts will no longer appear to be integrated with the Android Contacts app. Since Facebook contacts cannot be exported from the device, the appearance of integration created a false sense of data portability. Facebook contact data will continue to appear within the Facebook app. Like all developers on Android, Facebook is free to use the Android contacts API to truly integrate contacts on the device, which would allow users to have more control over their data. We are removing the special-case handling of Facebook contacts on Nexus S and future lead devices. We continue to believe that reciprocity (the expectation that if information can be imported into a service it should be able to be exported) is an important step toward creating a world of true data liberation — and encourage other websites and app developers to allow users to export their contacts as well.

One can't help but feel like a pawn in this game of data-hoarding, as this is only the latest blow in a long battle between the two internet giants over "data liberation". Most of the actions taken by each company have had relatively minor effects on Android users, but this move hits Nexus S owners hard and will clearly have implications for Android in the long term. It's hard to imagine Facebook changing their policies before we see, what Google calls, "future lead devices".

It's obvious this decision was designed to start a public outcry, but it is yet to be seen if this outcry will actually be directed at Facebook, as the public is used to their dictatorial approach to user data. Given this acceptance, I wouldn't be terribly surprised if the displeased Nexus S users directed their scorn at Google itself. In any case, I suggest you grab some popcorn and settle in, this heavy-weight title match is about to get good.

To be clear on the situation for Nexus One owners:

There will be no change in the way Facebook contacts appear on the Nexus One. Since the Facebook app was preloaded on Nexus One, it created an expectation for users of how the device would function.