Not only is the phone powered by a 1GHz TI OMAP4 dual-core processor (which seems to be just as beefy, if not beefier than Tegra 2), but it's also the world's first dual-channel and dual-memory Android smartphone to aid those 2 cores and squeeze every last bit of juice out of them.

The LG Optimus 3D packs exceptional features with performance in mind, including an advanced dual-core, dual-channel and dual-memory architecture.

It features a dual-lens camera that enables users to capture any moment in true 3D which can then be viewed immediately on the 4.3-inch WVGA glasses-free display.

So, how does the new architecture fare against the competition? Not too shabby, I'd say - according to LG, the Optimus 3D scores a mind-bending 2958 in Quadrant - the highest out of any stock Android setups we've ever seen. Phone Arena took the phone out for a spin at MWC to do a real-world test of their own and got about 2800 points, which is still the largest number to show up on a non-modified device.

For comparison, Phone Arena also tested the LG 2x which scored 2700 or so and the Galaxy S II, which got a measly 1950, probably resulting from Samsung's constant woes around using an unoptimized filesystem, which required all kinds of lagfixes in the past (although, if the filesystem is in order, then the S II has other problems we don't know about yet).

In addition to the insane performance, the Optimus 3D's glasses-free 3D playback and recording of 3D videos leave me with just one word: WANT.

Update: AnandTech ran a few tests as well, confirming that Optimus 3D is indeed a monster: 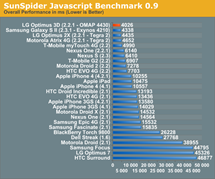 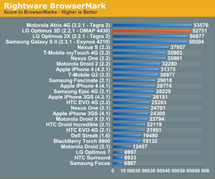 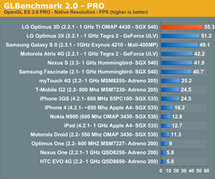 For the happy ending, LG provided us the following cheery Optimus 3D videos - feast your eyes and pray that your favorite carrier gets it soon: