This is part two in a series of editorials addressing our editors' biggest gripes with Android. Click here for part one, on fragmentation.

Android has advanced by leaps and bounds with the last few revisions. Android 2.2 (Froyo) famously brought massive performance improvements, 2.3 (Gingerbread) brought many subtle (and in sum, quietly substantial) usability and UI improvements, while 3.0 (Honeycomb) is bringing an entirely new UI to the OS.

I have to admit - I laid out this editorial weeks ago, when Gingerbread was still in its infancy and Honeycomb had yet to be officially revealed. Having used Gingerbread-powered CM7 for nearly a week now, I can say that Google is really starting to make progress on my gripes. So what's my beef? It's still not enough, and they've yet to address some even more substantial issues.

But First, A Little Background

In May of 2006, Google hired designer Douglas Bowman as Visual Design Lead. He had a hand in establishing the unified design language at Google, but left on a not-so-happy note in March of 2009. In a nutshell, his gripe boils down to the engineering-lead corporate culture at Google. In no way, shape, or form is an engineering-lead mindset a bad thing overall. After all, Google is very good at very many things for that very reason.

I have no idea if Mr. Bowman had a hand in handling the visual design of Android, and it's irrelevant for my point. What is relevant is that visual design took a back seat, and was decided largely through (figuratively) linear means.

And so we ended up with this: 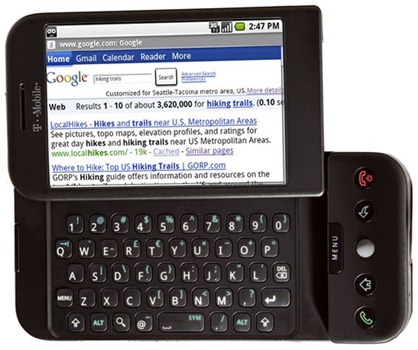 By just about any standards, AOSP Android has never really been attractive. In fact, I'd even say I think it has always been the least attractive smartphone OS, by a long shot.

The lame UI that's plagued Android may be the most obvious shortcoming, but it's not the only issue. For example, sliding between homescreens was noticeably laggy until Gingerbread. The lockscreen is still utterly lackluster, and the OS still lacks many transition effects.

Further, even in Gingerbread the system UI isn't totally unified. At times, highlights and accents are orange, and other times, green. And while you could argue that the situation has improved now that the system icons are adhering to some kind of green theme (for the most part - the Talk and Gmail icons aren't), I'd have to point out that they're still ugly as hell.

As I said before, Google's working to address some of these issues. They hired Matias Duarte - the man credited with creating the beautiful UI for WebOS - in late May. Gingerbread makes the entire OS much smoother and adds/improves transition effects (though it's still a bit of an ugly duckling), and Honeycomb will bring a hardware-accelerated UI, which should help significantly. As for transition effects... well, I have no idea if there are any planned, but I certainly hope so.

Even though it still has a ways to go, it's comforting to know that the UI shortcomings are being addressed. But that's not the only issue I see with the OS. More importantly is cohesiveness - the OS lacks uniformity. What do I mean? Well, I can't say it much better than Engadget's Joshua Topolsky in his review of the Nexus S:

Well, let's be clear -- Google still has major issues with text selection and editing on Android devices. The first striking problem is that there is not a consistent method of selecting text on the device. None. At all. In the browser, you long press on text to bring up your anchors, then drag and tap the center of your selection -- boom, copied text. In text editing fields, however, in order to select a word you must long press on the word, wait for a contextual menu to pop up, and then select "select word" -- a completely counterintuitive process. In the message app you can long press to select only the entire message, and in Google Reader? You can't select any text at all. Even worse, Gmail has a different method for selecting text from an email you're reading, and it's far more obnoxious than any of the others. There, selecting text goes from being mildly annoying to downright silly. Want to grab some text out of an email? Here's your process: hit the menu key, hit "more," hit "select text," and then finally drag your anchors out. Funnily enough, a little cursor appears when you start selecting -- a holdover from Linux? To have this many options and discrepancies over something as simple as copy and paste should be embarrassing to Google. What it mostly is, however, is a pain to the end user.

And that's kind of the crux of our problem with Android in its current state. We don't question the power of the OS, but the fit, finish, and ease of use simply is still not there. There is something disconcerting about an operating system that changes its rules from app to app -- for a mobile interface to work well, it has to be approached holistically and organically.

Text selection disparity aside, there are issues with the system just not performing as expected from time to time. For example, if you get a text message and open it from the status bar, then hit back, it takes you back to the homescreen, rather than back a menu to the messaging conversation list. I already have a dedicated home button; if I wanted to go back to the homescreen, I'd hit that. Even worse, the same thing happens sometimes when you open the messaging app: it opens directly to the last thread you had open, and when you hit back, you're once again back to the homescreen. The first case I can at least understand from a strictly logical point of view, but the second just makes no sense no matter which way you look at it.

The messaging app isn't the only issue, though - there are times when a recently used app doesn't appear in recent apps. Case in point: Google Talk. If you don't have Google Talk open, receive a message, and open it via the status bar, Talk doesn't show up in your recent apps - even though you just used it. The same issue is encountered when using apps indirectly - for example, if you're in the Gallery and share an image via imgur, the imgur app opens. But once you're finished with your sharing, the app isn't in recent apps. Ditto for composing a tweet from share.

Light At The End Of The Tunnel

As I mentioned earlier, my UI/graphical gripes were laid out before Gingerbread was really hitting the ROM mainstream and Honeycomb was extensively previewed. The bulk of the UI issues will likely be solved by Honeycomb, although just how many of Honeycomb's improvements will make it into the phone version of the OS is up in the air.

But what about uniformity and cohesiveness? Well, some improvements are to be found in Honeycomb, but as a whole, this one is a bit harder to judge - with every revision of Android, Google makes tons of improvements to the system. It's hard to say where this brand of issues rates on Google's priorities list.

In the meantime, I'm going to continue to customize my phone in just about every way I can - from custom ROMs, to custom themes, to custom lockscreens, and beyond - to make it more beautiful than others can match. After all, that's what makes Android the best OS, even despite its flaws.

[Weekend Poll] Is The Nokia/Microsoft Alliance A Threat To Android?