When it comes to haptic feedback, which is a fancy term for the way your smartphone vibrates or physically responds to your actions, smartphone users are not used to much variety. Unlike the complicated haptic motors in console gaming controllers, my EVO has a pretty standard and very basic vibrating motor inside, and the only aspect apps can control is the length of the vibration. Boooring.

The Future Of Haptic Feedback

Earlier this week, I met with marketing execs from Immersion, which makes software for those haptic motors that let your handset vibrate. When asked for an example of a device that has Immersion-powered chips in them, I was given the whole Galaxy S line, which shows the company means business.

The reason for the meeting? Immersion is introducing a new platform called MOTIV, aimed at both developers and OEMs (OEMS are device manufacturers). I've played around with some reference devices powered by the new technology and left the meeting relatively impressed. Strumming the virtual guitar felt very realistic, almost surreal, and playing games prompted haptic feedback that varied in strength and precision based on the weapon chosen. When I whipped out my EVO 4G to compare to Immersion-powered devices, I was immediately embarrassed by its more than mediocre performance - the vibrations felt weak, imprecise, and monotone.

I will spare you the technical details of yesterday's announcement and instead summarize it in my favorite bullet point style. All I can say is, I don't see any downsides and there are plenty of upsides. HD Haptics, which is what Immersion calls their technology, is preferred by the majority of people who try it, myself included. And it's not just an empty statement - the company ran an extensive study, the results of which you can see below:

So, back to the MOTIV platform. Here are the main ideas: 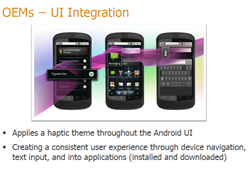 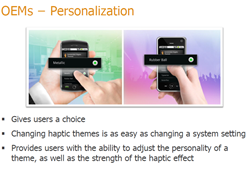 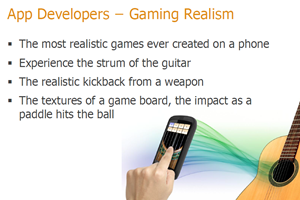 The MOTIV Integrator is available immediately and the MOTIV SDK will be available in March. The company is doing demos at MWC in Barcelona next week, as, understandably, it's hard to demonstrate touch technology without letting us... well... touch it.

I sincerely hope manufacturers and developers will adopt the hardware and software provided by Immersion - the experience of really feeling your phone changes your whole perspective (think PS3 or Xbox controller with and without feedback).

For more information, you can check out this page as well as the documents from the in-person meeting: