The latest Angry Birds update v1.5.1 that hit the Market yesterday introduced a whole bunch of levels, support for lower-end devices, and... a new SMS permission requirement. This not only prevented the update from being installed automatically, but also created quite a bit of user confusion, or even panic, around the reasons why the game would ever need to send or read our text messages.

Rovio's own Twitter account, probably manned by one of those evil pigs, insisted it was a mistake that would be fixed Monday, which calmed some of us down, but the truth ended up lying elsewhere. In fact, it turned out we knew about it all along, but most of us forgot in the 2 months that followed.

In today's blog post, the company provided the real reason for requiring the oddball SMS permission - Bad Piggy Bank, which is Rovio's own attempt at in-app purchases. If you wanted to buy something, like the Mighty Eagle or new levels, the Bad Piggy Bank would simply send out an SMS message to Rovio, and your carrier would in turn bill you for it later. 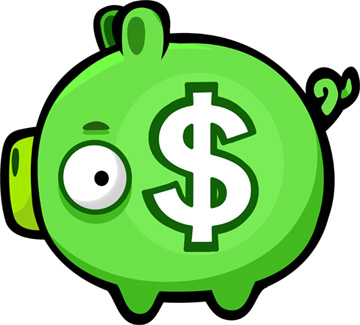 The system is currently only available in Finland, though Rovio promises to add more countries in the future. The main point is - the Bad Piggy Bank is the only reason the SMS permission was added, and it's quite likely that it won't affect you at all.

I suppose someone should let Rovio in on that native in-app purchase support that is coming to Android this quarter.

We are bringing Angry Birds players on Android the option of purchasing the Mighty Eagle and other cool new content in the future using our brand new payment system, Bad Piggy Bank!

Bad Piggy Bank purchases will be paid through operator billing. No credit card is required, you simply select the content you want to purchase in the game, and select the Bad Piggy Bank icon. You confirm your purchase, the payment is made via SMS, and you will be charged in your phone bill.

The Android version of Angry Birds asks for SMS permission because this mobile payment capability has been added in version 1.5.1.

Angry Birds does not use the SMS functionality of the device for any other purpose than Bad Piggy Bank payments.

If the Bad Piggy Bank is not available for your operator, no purchases can be made, and you cannot be charged for anything.

Right now, the system will be available only in Finland for Elisa customers, with more countries and carriers following later. We are working globally with operators on bringing Bad Piggy Bank to all of our users worldwide - ask your mobile carrier or operator for more details!

The Race Is On Again - Fast Web Installer Returns To AppBrain