Google's web-based Android Market announcement earlier this week was by all means no surprise to anyone - we've been waiting for it to arrive ever since its announcement at last year's Google I/O. In the meantime, alternative web-based markets, such as AppBrain.com, have skyrocketed in popularity because they allowed Android users to browse apps and games from their computers rather than being confined to their small phone screens. Even more importantly, alternative web markets had full control over app presentation, which allowed them to develop their own app discovery mechanisms.

AppBrain is probably the best example of such innovation - it combines easy-on-the-eye looks with functional app pages that don't look overbloated with ads, and their slicing and dicing of the Market using advanced filters goes way beyond Google's - it's simply excellent. AppBrain has a soul and is very much loved by the Android community, so as soon as the news of the official web Market hit on Wednesday, I reached out to Uwe Maurer, one of Appbrain founders, to get the answer to the "now what?" question we all have on our minds. 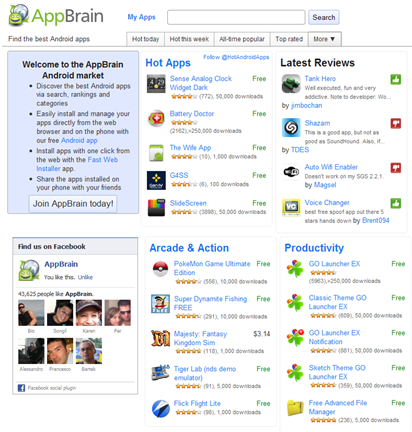 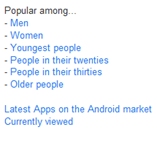 Android Police: What prompted you to start Appbrain? Can you provide us with a brief history of the project? How big is the team and where is it based? How long did it take to create and launch the site?

Appbrain: We are two software engineers based in Zurich, Switzerland. In 2009 we developed a couple of quite successful Android apps (Funny Jokes, Steamy Windows etc). We also noticed that for a user it is really difficult to discover great apps in the market. There are so many new apps coming in everyday and not all of them are good. The Google market itself offers only very limited ways to discover new apps since the rankings rarely change. Also at that time it was not possible to easily install an app from the web to the phone.

We thought that we can make this better and started working on AppBrain in December 2009 and released the first version in February 2010. It made it really easy to find apps on the web and install them on the phone.

Android Police: From the time Appbrain was born to the present day, has it lived up to your expectations? Exceeded them?

Appbrain: The success of AppBrain exceeded our expectations by far. We got overwhelmed with positive feedback from our users and bloggers. We kept working on AppBrain full time since then, adding new features and improving app discovery.

Android Police: I'm sure you've foreseen Google's move and are probably surprised it took Google this long to release the web-based Android Market. It does navigation and presents information fairly well but isn't on the same level of content discovery compared to Appbrain (at least not yet).
So, this is probably the most important question of all: now what? What is going to happen to Appbrain? Are you going to change direction? Continue doing what you're doing?

Appbrain: Google announced this web based market back in May 2010 at the Google IO conference. We didn’t expect that it took them so long to release it. Surprisingly they did not add any new features compared to the demo which was shown about 9 months ago.

We are very optimistic about the future of AppBrain and we think that as a small team we can iterate much faster on interesting new features and stay ahead. Our plan is to continue improving AppBrain rapidly and remain the best place to go if you want to discover great apps on Android.

Android Police: What are some other advantages Appbrain still has over the official Android web Market?

Appbrain: We offer quite a lot more features compared to the Android web market. The features that make AppBrain unique are:

For developers we also offer many features that are not available by Google:

Android Police: Appbrain's Fast Web Installer was a very handy way to install apps while browsing Appbrain.com. How did you come up with this approach? As far as I understand, it was categorized as a vulnerability by Google later, and the hole was subsequently closed. After Google patched the hole, the Fast Web Installer could no longer function.
Now, several months later, Google's own web Market includes the very same web install functionality, obviously with the difference of being official and not a result of a security hole.
What are your feelings on that? Have you reached out to Google for a solution that would allow Fast Web Installer to work again?

Appbrain: Only Google knows the exact reasons why they disabled fast web install. Our users and we were of course very disappointed that this convenient feature was not possible anymore. We are currently looking into ways to bring it back though.

Android Police: Your current Alexa ranking is 3384. How many monthly visitors does that translate to? What impact on your traffic do you think the official web market will have or has already had since it was released?

Appbrain: Of course there is more competition on the web for Android users now and it will get harder to attract users. However in the end this is good for the users if there is more competition, we will try our best to stay ahead and provide the best service. We are not worried about the competitors, even if it is Google, we are just focused on improving our own service.

We currently have almost 2 million downloads of the AppBrain app, even though there was always competition from the Android market app.

Android Police: Does your team have any other projects in the Android space? I know you've authored quite a few apps. Have they been successful in generating revenue for you? Are there plans to move strictly to Android development?
How many and which Android devices does the team own and use for development and testing?

Appbrain: Yes, we develop a couple of other apps, most of them were originally developed before we started on AppBrain. The plan is to keep working on AppBrain as our main project. Once in a while we like to release new apps, for example before Christmas we released a Christmas card app.

Android Police: What's the phone coming out this year that has you excited the most?

Appbrain: I am most excited about tablets this year. I am looking forward to the Motorola XOOM and also the others tablets that will come out with Android 3.0 this year.

Android Police: What are the top places that send Appbrain traffic?

Appbrain: We get a lot of direct traffic which is great because our users remember our website and go there directly. Also a lot of traffic from Google web search and from many Android related blogs and websites.

Android Police: How about your favorite Android apps and/or games?

Appbrain: Of course I use AppBrain a lot, also Skype and Twidroid. My favorite games are Angry Birds, GalaxIR Star and Robo Defense.

Android Police: Is there anything else you'd like to mention as part of this interview?

Appbrain: Thank you for the interview and many thanks also to our users who helped us with all their feedback to build AppBrain!

So, there you have it, straight from the horse's mouth - Appbrain is not planning to give up or go away, although I think it will undoubtedly take a hit. Will you still visit AppBrain or does the official web Market satisfy you 100%?

Official uTorrent Remote App Debuts - Manage All Those Perfectly Legal Downloads From Your ...