Even though Motorola's original CLIQ received a 2.1 upgrade a long time ago, CLIQ XT owners have been patiently (and impatiently) waiting for the good news ever since. Unfortunately, it will never come, as Motorola's official decision, posted on their Android Software Upgrade News, is to forever doom it to 1.5. It is hard to imagine which differences between the original CLIQ and the XT prompted Motorola to refuse the upgrade, because the phones are really very much the same, and the biggest difference between them is the physical keyboard on the CLIQ.

As if that wasn't enough, about a week ago, Motorola/T-Mobile sent a lovely targeted email to all CLIQ XT owners (in addition to Backflip and potentially some others), inviting them to upgrade to the CLIQ 2. Considering there was no special pricing involved, and in fact those who clicked through to T-Mobile's site were greeted with CLIQ 2's full off-contract price, most people viewed this audacious upsell attempt as a slap in the face.

And today, my unfortunate CLIQ XT friends, it became a double slap. 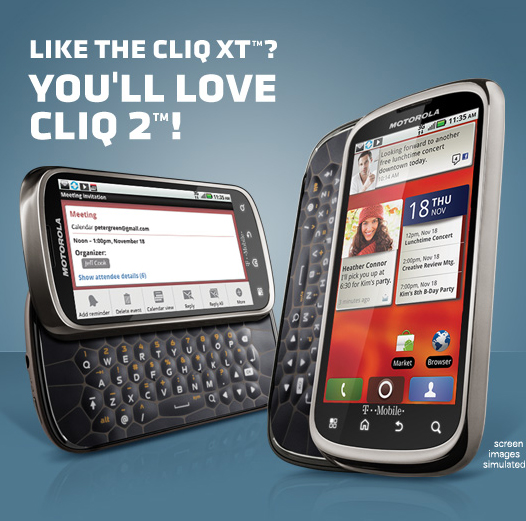 Here are some cheerful quotes from the forums regarding the upgrade offer. I'm not even going to include the posts that resulted from the news of CLIQ XT getting stuck with 1.5. Yikes.

"I woke up this morning with an email saying upgrade my CliqXT. Wow, I said, did Motorola finally release the Android 2.1 update without a soak test. I was quite excited what a great subject. But then I actually open the email and see it is a SPAM email saying to upgrade to the Cliq2. So I think did Motorola finally give up on Android 2.1, have I been once again been put down and proven wrong and they are not releasing it.

Well after a second I thought, well I guess if we return the XT's to them and they send us a Cliq2 most people would be willing and accepting to be happy about it. So I click on the Upgrade link, It takes me to the T-Mobile site and has the regular price for the phone listed. Well once again I was too wishful and I was once again disappointed.

Now this is directed at Motorola Marketing, I unlike most am NOT on a 2 year contract so I could freely upgrade if I had the money and confidence in the device. However, most people that have a CliqXT are still on their 2 year contract, heck the CliqXT came out in March of last year, so for the most part the min people can be on the contract is 10/24 months, meaning that they can't actually upgrade. Why send out an email to upgrade when the majority of XT people cannot even extend their contracts to do so.

So Motorola, I once again am quite disappointed. Heck, I actually love the new dream I had this morning of returning the XT and getting a Cliq2 back. Might be better at this point for your loyal customers."

"I'm beginning to think that this email is further proof that Motorola has been trolling us for a loooong time."

"Eight months ago I bought 2 Cliq XT's to Motorola and T-Mobile's fortune. It was also the beginning of a wonderful relationship with the Live Chat support to hear time and again "we appreciate your business but we know nothing about the promised upgrade". As many of you I was fooled and robbed by T-Mobile and Motorola."

Are you upset at Motorola? T-Mobile? Google? Every phone has an end-of-life timeline but is XT's too early (released in Q1 of 2010)? CLIQ XT owners, let's hear your thoughts.

The Android Effect: HTC's Gross Profit Has Tripled Since Introduction Of Nexus One

Yes, Folks, Honeycomb IS A Tablet OS - Though Some Of Its Features May Arrive On Phones "Over ...