Based on the press release and official video, Verizon's new VZ Navigator VX is awesome. Really awesome. Potentially better than Google Maps 5/Google Navigation - and yes, I can hardly believe I'm saying that either, since the new GMaps combo provides a hell of a punch. But check out the short (just over two minutes) promo video, and you'll see what I mean:

Two major items of note there: first, assuming everything works, then big red did a hell of a job on the app. Second, they've delivered just what we've all been asking for: more Bing! As the video proudly shows, there's a serious degree of Bing integration in the app. 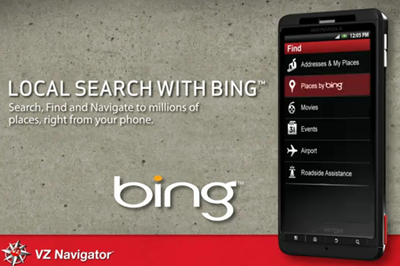 Still, Bing's not really all that bad - although some choice would be nice - and frankly, it's hard to say if it's detrimental (or, dare I say, beneficial) compared to Google's own solution. Perhaps we should all wait until we get some hands-on time with the app to make a judgment call on this one, hmm? 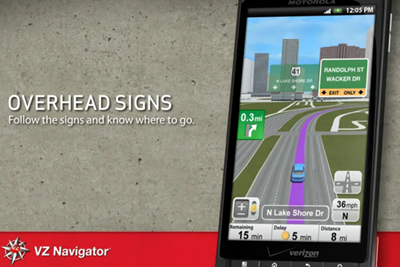 Oh, and before you Continuum owners get all worked up: VZ Navigator VX is only available on the Droid X, Droid Incredible, and Fascinate for the time being.

VERIZON WIRELESS LAUNCHES VZ NAVIGATOR VX ENABLING DROID TO DO DIRECTIONS LIKE NEVER BEFORE – IN 3D
New Version Gives Customers Enhanced Navigation Capabilities, Including 3D Views and Satellite Maps
Verizon Wireless today announced VZ Navigator VX – the latest version of the company's award-winning navigation service – is now available on select DROID™ smartphones, including DROID X by Motorola, DROID Incredible by HTC and the Samsung Fascinate™.  Powered by TeleCommunication Systems, VZ Navigator VX is unlike any other navigation service offered today, providing customers with 3D navigation views using enhanced 3D city models and true-to-life images of highway and exit signs.
An evolution of ordinary direction services, the 3D capabilities of VZ Navigator VX are available in six cities at launch, including: Chicago, Detroit, Los Angeles, Kansas City, Mo., New York, and Washington D.C., with more cities being added in 2011.  The 3D city and road views add dimension to the turn-by-turn directions VZ Navigator VX offers.  Other enhancements in the newest version include "real" signs and road views, satellite maps and day/night modes among other features.
"Verizon Wireless continues to add more to VZ Navigator, and VZ Navigator VX now gives our customers some of the most advanced mapping and navigation services available today," said Kristi Crum, director, Consumer Solutions for Verizon Wireless.  "Whether they are in a familiar place and need to get around more efficiently or exploring new territory in a car or on foot, customers can turn to VZ Navigator to get them where they want to go."
VZ Navigator VX builds on existing location-based technology, including an easy-to-use interface, improved functionality for finding points of interest, the ability to run multiple VZ Navigator functions simultaneously within a navigation session and integration with Facebook®.
Customers can download VZ Navigator VX from the Android Market™.  It is available for $9.99 a month for unlimited access, $4.99 for a weekly usage or $2.99 for a one-day/24-hour use.  VZ Navigator VX is available initially on DROID X by Motorola, the Samsung Fascinate and the DROID Incredible by HTC with additional devices rolling out in 2011.  Unlike traditional navigation devices that require annual upgrades to remain accurate, the monthly charge includes continuous updates to maps and points of interest.  Download charges vary and airtime or megabyte charges may apply when browsing, downloading and using certain applications.
TeleCommunication Systems (TCS) (Nasdaq: TSYS), is a leader in location-based technology whose mobile services empower consumers to make quick, smart decisions when they're on the go.  For more information about TCS products and services, visit www.telecomsys.com.

Verizon Wireless reminds customers that when behind the wheel, safe driving should always be the first priority.  For additional information and a full set of terms and conditions for VZ Navigator, visitwww.verizonwireless.com/vznavigator.