Next Wednesday, Google will be holding a press event to showcase Honeycomb and discuss Android at large. Team Android is going to give attendees an "in-depth look" at Honeycomb, news regarding the Android ecosystem, and a number of hands-on opportunities while at Google headquarters in Mountain View. 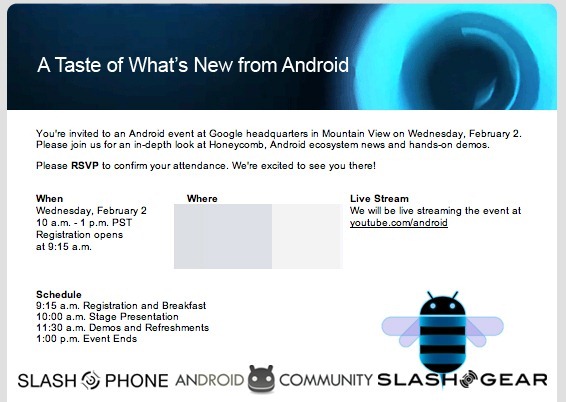 The presentation will be streamed live at www.youtube.com/android starting at 10AM next Wednesday, so everyone will get a chance to tune in for the latest and greatest in the world of Android and Honeycomb.

Considering this is being labeled a press event, it's probably just an opportunity for Google to give Honeycomb some hands-on exposure to the major media outlets and blogs alike. The "ecosystem news" will probably provide an update on the numbers of apps in the Market, phone activations per day, and handset market share information.

But who knows, Google Music could be ready to make its debut - or major changes to the Market's app policing and organization. We'll find out next week.