Nexus S owners, listen up. If you own Samsung's flagship "Google Experience" device, it's likely you've experienced a random reboot bug that we reported on over 2 weeks ago. The Google bug tracker thread for this issue has been a roller coaster of emotion - after getting filled with a large number of comments, it was declined by a Google employee, only to be reopened shortly after due to a public outcry.

As if adding fuel to the fire, the thread was closed yet again in the past hour by a different employee. His action were reverted mere minutes later, which is making me wonder whether Google engineers sometimes need to talk to each other a bit more often. In Google's defense, there was already another report on the Mobile Help forums tracking this issue and they were trying to keep feedback down to a single location.

Fast forward to a few minutes ago, Ry Guy, an authoritative figure from the Android team, finally provided a relatively concrete and promising response to the Google Mobile Help thread:

The initial results of our tests look very promising. At this rate we will most likely be rolling out an OTA to resolve this issue within one to two weeks. We really appreciate your patience as we do our final verifications on this fix before sending it out.

So there you have it. Hopefully, the Android team will find no complications during testing, and teary-eyed Nexus S owners will be seeing an OTA notification in the promised 1-2 week period.

On a completely unrelated note, maybe this photo I snapped at CES will cheer you up in the meantime: 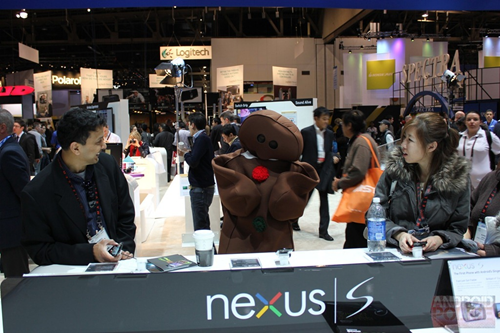 Thanks to Taylor and @monolithnyc for bringing this to our attention.