The Honeycomb SDK preview, allowing everyone to take a peek and play around with Honeycomb using the Android emulator, was launched yesterday, but after we got past the initial excitement, we found that the emulator itself was dog slow and pretty much unusable. In fact, it was so frustrating to use it that I wanted to punch walls and rip out my hair after 5 minutes with it. And I'm not even going to talk about orientation problems - how the Android team managed to ship the SDK with orientation broken by default (there is a fix for it in the Settings > Display) is beyond me and beyond the scope of this article. We're not the only ones who noticed - Engadget's own hands-on says "Honeycomb's is extremely slow -- nearly to the point of uselessness in this case."

So, can we expect better performance out of this clunker soon? After looking around, I found this promising tidbit in the SDK Tools r9 release notes:

Furthermore, to confirm the above, I've posted a question to StackOverflow, following Reto Meier's suggestion. His response:

The short answer is "yes". The Honeycomb emulator performance will be improved in future release of the development tools.

For right now, you should start by increasing the amount of device RAM used by the emulator. The default is 256Mb but 1Gb is probably more reasonable.

Additionally, there have been reports that by lowering the resolution of the emulator, you will gain quite a large performance boost.

At this point, I think we might as well do both of the above and hope Google is taking the issue seriously (when they're not busy putting in Easter eggs). 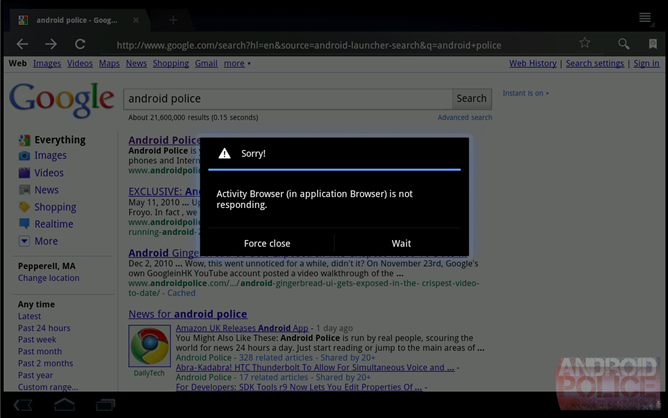 T-Mobile Sidekick 4G To Be Manufactured By Samsung, Rocking Android 2.2.1 In Current Iteration