With training for the HTC Thunderbolt starting today, a few Thunderbolt goodies surfaced. According to the leaked screenshot, the HTC Thunderbolt will be able to handle both voice and data simultaneously on Verizon 3G. As many of you probably already know, Verizon's CDMA network was incapable of producing this in the past (voice and data use separate channels on CDMA), but apparently HTC and Big Red have done some magic and figured out a way on this new 4G device. 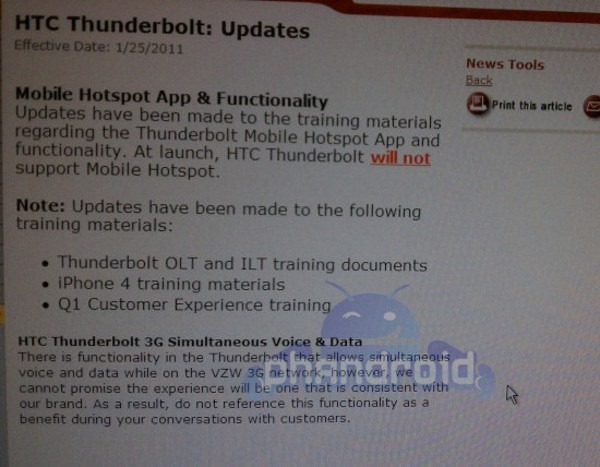 For those who can’t see the text in the watermark in the image above:

There is functionality in the Thunderbolt that allows simultaneous voice and data while on the VZW 3G network, however, we cannot promise the experience will be one that is consistent with our brand.  As a result, do not reference this functionality as a benefit during your conversations with customers.

Not too sure yet on how they did it, but I can't wait to find out.  Honestly though, does this make anyone want a Thunderbolt more than they did before, or is this device just "meh" for you?