CES 2011 was an occasion for manufacturers to flood the market with a plethora of Android devices, and powering many of them was NVidia's Tegra 2 chip.

Released late last year, the Tegra 2 chip uses the "system-on-a-chip" design to integrate an ARM CPU (1GHz dual-core Cortex-A9 processor) and a NVidia GPU into one package. This allows faster communication between the cores and the integrated memory controller. Most of the tablets and smartphones, and other unique hybrids, launching in 2011 will be using the Tegra 2 chips.

But, no sooner has the dust settled and NVidia is already planning for the future.  A leaked slide from NVidia reveals that the Tegra 2 will soon be replaced by the Tegra 2 3D, which will subsequently be usurped by the "world's first mobile quad-core processor," the Tegra 3. 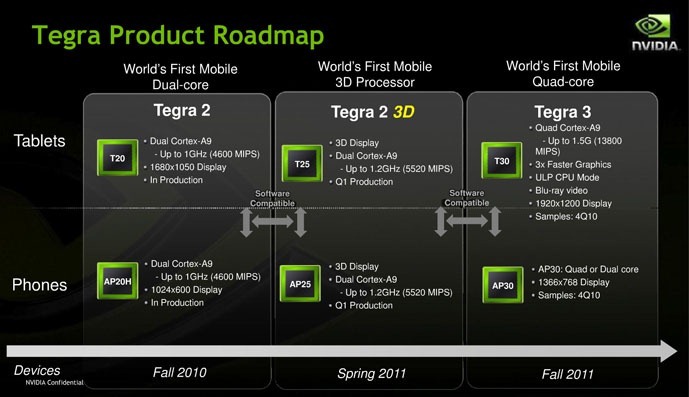 The Tegra 2 3D bumps the speed of the integrated ARM processor to 1.2GHz and adds mobile 3D support. If manufacturers start integrating the Tegra 2 3D into their devices, your smartphone and tablet will have 3D displays that will not require any glasses (like the Nintendo 3DS).

Aside from the introduction of mobile 3D displays, the Tegra 2 3D is merely a power boost. In contrast, the Tegra 3, launching in Fall 2011, will be a completely new revolution in mobile processors. The T30 Tegra 3 chip, made for tablets, will integrate four 1.5GHz Cortex-A9 processors and a 3x faster GPU that will be able to support Blu-ray video and displays with up to 1920x1200 pixel resolution. The slide also indicates that the T30 will feature an "ULP CPU mode"; this is nVidia's Ultra Low Power mode - probably a form of idle core deactivation. The T30's little brother for smartphones, the AP30, will come with quad or dual-core options and will have a GPU that will support displays of up to a 1366x768 pixel resolution.

I was considering jumping on the bandwagon and picking up the Motorola XOOM, but now I am contemplating waiting till 2012 for Tegra 3 powered tablets!

Credit: Bright Side of News via Engadget

Sony Ericsson Xperia Arc Shows Up In A Detailed Video Walkthrough, We Wipe Off Drool Yet Again