This morning, I noticed an interesting thread in the EVO subsection of the XDA forums that claimed to be able to fix music streaming (which was broken in some apps after the latest OTA), while boosting 3G speeds by .2 to .6 Mbps. As the process is very simple and easily reversible, I gave it a go - but decided that I was going to use SpeedTest to benchmark the changes. Unfortunately, what I found wasn't what I expected.

Before doing anything, I ran the test three times. Before the fix my average download speed was 938.67 Kbps. After I ran the fix, my speed dropped to an average of  782 Kbps. I assumed that maybe something was sucking up data in the background (although the 3G indicator was unlit, as shown in the screenshot below). 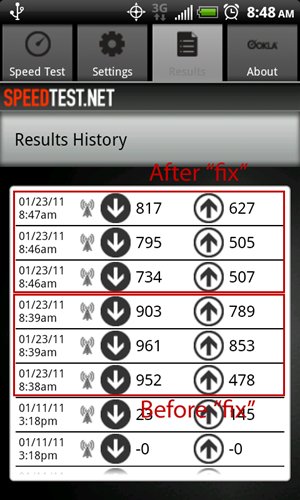 I decided to test again. I ran three more trials with the modified settings in place, this time to an average of 846 Kbps. I then put my settings back to stock, and ran the test three more times. Unfortunately, the SpeedTest app didn't save my results for the first two tests, but both times my speeds were about 850 Kbps. The third was 818 Kbps, bringing my average download speed to roughly 839.33 Kbps. 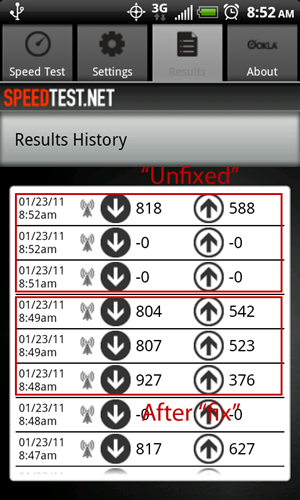 So what do the results mean? That I have no idea if this helps 3G or not. The XDA thread is filled with users saying it's boosted their speeds (sometimes substantially), but that's not as important to me as the fact that it does fix music streaming, so I'll be keeping the fix in place. Here's how to do it:

If you're running a custom ROM, it must have Sense UI. 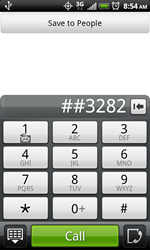 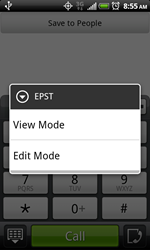 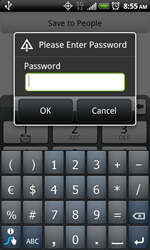 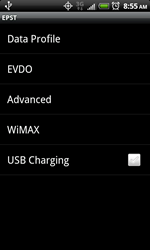 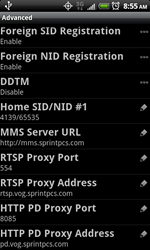 That's all there is to it. Once you've made the changes, just hit the "Home" button and you're all set - you don't even need to reboot.

Froyo Update Now Rolling Out To The LG Ally