Kongregate.com, snatched up by GameStop last year, is one of the most popular time-killing websites in the world, with hundreds of original Flash games to entertain visitors for hours. It was only a matter of time for the company to bring the most mobile friendly of those games directly to Android in a single easy-to-consume package, called Kongregate Arcade.

Update #1: As many of you noticed, the app has been pulled from the Market. Apparently, even Kongregate doesn't know why just yet, as they've issued the following statement:

"As reported earlier today, the Kongregate Arcade app was launched on the Android Market and was enthusiastically received by the gaming community, receiving 4.5 out of 5 stars. Tens of thousands of users successfully downloaded the new app but, due to unknown reasons, Google has pulled it from the Market. Gamers wishing to experience Kongregate Arcade will be happy to learn it is now available for download at http://kongregate.com/android."

Arcade is a mini-Market, containing currently over 300 free Flash games, hand-picked by Kongregate. Before you freak out about yet another Market, it's really not - it's more of a proper mobile app around Kongregate's content. You can filter and rank games, log in with your account, earn badges and other achievements, and cache some of the games onto your phone for offline play.

Of course, since all games are powered by Flash, you need at least Android 2.2 with Flash 10.1 installed. Sorry, current Samsung Galaxy users in the U.S., direct your complaints to Samsung. 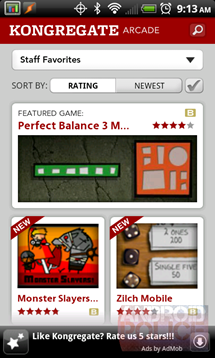 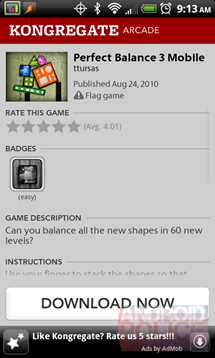 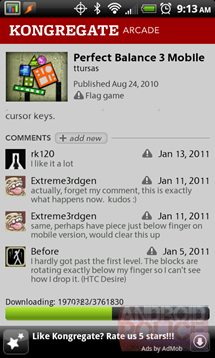 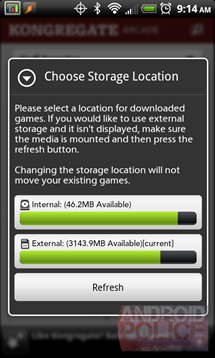 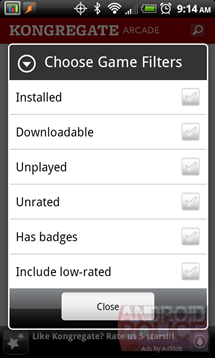 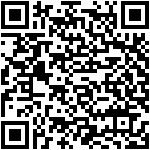 The introduction of Kongregate Arcade signals another strategic step by Kongregate to allow gamers to access and play hundreds of games anytime, anywhere from their desktop or on their mobile device, and gives game developers yet another viable platform to design and showcase their games. Kongregate Arcade will also be promoted in parent company GameStop's, (NYSE: GME), 4,600 stores in the US.

Games are increasingly dominating America's growing appetite for mobile Apps. Given that Android OS is the fastest growing smartphone operating system, making a move into the Android Marketplace is the next logical step for the rapidly growing Kongregate.

"In creating the Kongregate Arcade, we wanted to solve the game discovery problem that all Android owners have shared," said Jim Greer, CEO of Kongregate. "It was important to reinforce our mission to provide gamers with great free games anytime, anywhere, and to broaden the reach of the Kongregate community across multiple platforms. The arrival of Kongregate Arcade is the perfect next step in that strategy."

Initially launching with more than 300 free Flash based games – one of the largest libraries of mobile games in the industry – new titles will be added to the App weekly with selection based on compatibility with the mobile platform and the ability to play on a touch screen device. In addition, Kongregate is actively looking to identify opportunities to work with its community of more than 8,500 developers to create new Flash based game content exclusively for the Kongregate Arcade library which should further jumpstart Android as a viable gaming platform.

With the launch of Kongregate Arcade, the company -- voted one of TIME Magazine's "50 Best Websites 2010" -- brings some of its most popular free Flash based games to the Android Marketplace, with top titles including mobile versions of Vector Runner, Assembler, Perfect Balance 2, Barry Lost His Marbles, Billy's Hill, Gem Grab, Pel Plus and G-Switch. Games featured on Kongregate Arcade span all of the top categories currently on Kongregate.com, including action, adventure, RPG, MMO, strategy, defense, and puzzle games, with all featured content rated PG-13.

[Hands-On] Zoom Widget Designer, An App By The Developer Of Tasker, Goes Into The Public ...