While we weren't exactly impressed by the Streak 7 at CES, Dell's upcoming tablet successor to the similarly-named phone may be arriving on T-Mobile rather soon - say, February 2nd. A photo of an internal T-Mobile document (courtesy of TmoNews) taken by the world's worst photographer all but makes official a February 2nd release date for the 4G tablet.

If you'd rather not squint, I'll just quote the text in question: 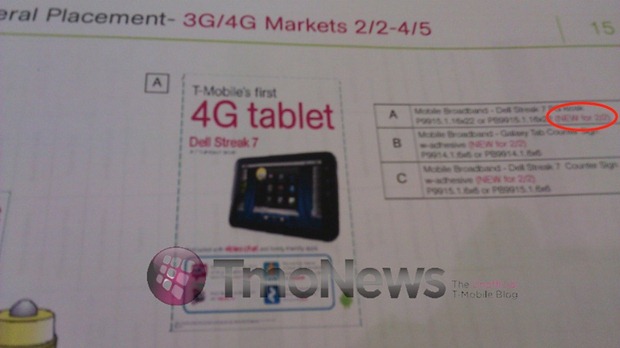 While these are just advertising materials, typically something as substantial as a full kiosk requires you have a working demonstration device to go with it, which usually don't show up until the product is actually on sale. Additional information will surely make its way through the grapevine in the coming weeks, but we'd say it's safe to mark your calendar on this one.