By now, you've probably heard of SwiftKey, an alternative keyboard that predicts what you are typing based on statistics and personal history. The company is planning on making an ever bigger splash in the world of Android by going the same route as Opera: creating an app specifically for Android tablets. 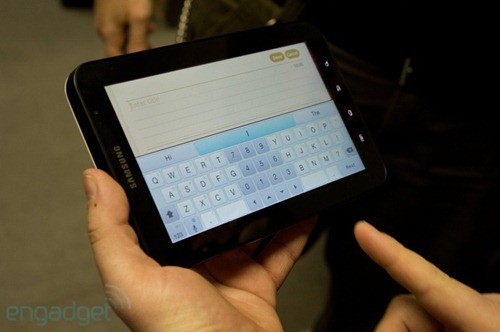 Still in prototype form, the keyboard includes the same text prediction that has made SwiftKey so popular, but takes advantage of the tablet's larger screen size (in this case, a Galaxy Tab; we'll have to wait and see how it works on upcoming 10" tablets) by splitting the keyboard into two sections, with a keypad, including arrow keys, in between. It certainly looks like a comfortable fit, with your thumbs having easy access to all of the letter keys and the keypad still being easier to use than on other keyboards. Notice also the split space bar, which, now that we think about it, makes a whole lot of sense this way.

Again, this is still a prototype, so there's no word on when we can expect it on actual devices.

Update from Artem: Having just spoken with Joe from SwiftKey on the phone, we should have a pretty good idea of what the next generation SwiftKey would be like by the time MWC rolls around in February (14-17th). According to Joe, what we're seeing here now is only the tip of the iceberg - the very first rough prototype that was achieved by basically rearranging the keys a bit and magnifying everything up. The next gen will blow our minds. What can say, Joe? Bring it on!!!