As a loyal Sprint customer, I must say - I was disappointed by the carrier's lack of announcements at CES. In fact, the only new phone they introduced was the HTC EVO Shift 4G, which offered little that we haven't already seen in a million other phones. But as it turns out, the nation's third-largest carrier isn't resting on its laurels; it was merely saving the more important announcements for its own event. 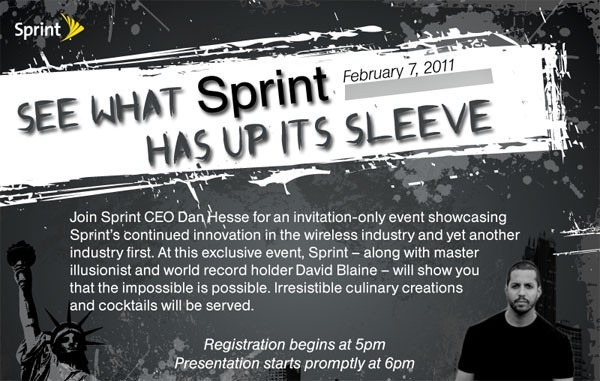 Indeed, Sprint has just sent out a handful of invites (see above) for an event on February 7 where "yet another industry first" will be announced. As usual, Sprint CEO Dan Hesse will be there... only this time, he'll be joined by master illusionist David Blaine. Who knows - maybe bringing Froyo to the Epic was a job only a magician could accomplish.

Samsung Vibrant 4G Is Coming To T-Mobile With A Front-Facing Camera, Full 21Mbps HSPA+, And Froyo