If there's one thing CES told us about the upcoming twelve months in technology, it's that 2011 will be the year of Android tablets. And with noteworthy entries such as the Motorola XOOM, ASUS' lineup, and the T-Mobile G-Slate, it looks like the tablets' quality might be just as high as their quantity - at least hardware-wise.

But what about the software? After all, isn't a device's OS what makes or breaks it? And even if the tablets are good, will consumers care? Let's take a look at the top five areas Android tablets will need to succeed in. 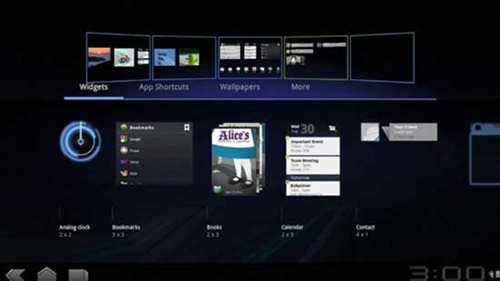 Ultimately, a good UI is one of the - if not the - most important aspects of a tablet. As Motorola's Jim Wicks put it, a tablet without tablet-friendly software is nothing more than a "smartphone that doesn't fit in your pocket."

Take the Galaxy Tab. Sure, it was deemed an excellent product by us Android enthusiasts, but other reviewers did not come to nearly as favorable conclusions. The #1 reason for their concerns? Froyo was clearly designed for phones rather than for tablets, and Samsung's TouchWiz UI didn't really add much to the mix.

On the other hand, Google claims that Android 3.0 - which is what most of the tablets we saw at CES will be running come launch time - was "built entirely for tablets," and the Honeycomb teaser video gives us no reason to doubt that. Additionally, Google didn't hire infamous designer Matias Duarte and buy BumpTop for nothing; it's obvious that the company is interested in improving the Android UI, and it seems they've done so, starting with tablets.

In conclusion, I think Honeycomb tablets will be pretty well off in the UI department - judging by what we've seen thus far, Android's graphical elements really have been redesigned so as to be more appropriate for a tablet's larger display.

Let's face it: Android's current multimedia solutions are somewhat of a train wreck. From the barebones music app to the nonexistent music/video store, there's no beating around the bush here: if Google plans to compete with Apple on the tablet scene, one of the most important things they'll need to address is multimedia.

We've already had a sneak peak at Honeycomb's music player, and so far, I like what I see. Plus, Google plans to allow users to send music from their computers to their Android devices wirelessly - sweet!

The bigger issue on the multimedia front is actually getting music and videos on the device. As it stands, Android does not include any sort of video store, and the closest thing Google offers to a music store is Amazon MP3 (which isn't quite sufficient in my mind - if Google wants to embrace multimedia, they'll need a premium solution of their own rather than an arguably second-rate third-party one).

One of Motorola's videos for the XOOM gives me hope in the video arena - it mentions watching movies "the way the filmmaker intended." This could be nothing more than a reference to the XOOM's gorgeous display, but I doubt Motorola would brag about the tablet's video-watching capabilities while simultaneously forcing users to scour the Internet for movies and then sideload them onto the XOOM's SD card, as is necessary with the current batch of Android devices (with the exception of Samsung's Galaxy line, which includes the Media Hub app). One can always hope...

One of the best things about the iPad is how many apps have been developed for it - according to AppShopper, more than 60,000 applications have been created specifically for the Apple tablet.

It's not just quantity, though; a lot of iPad apps are really fun to use and often include functionality that goes above and beyond what I'd expect from an app on my phone. So far, we haven't really seen many apps developed exclusively for Android tablets - one of the main reasons I haven't bought one yet.

Will we start seeing more of them once tablets like the XOOM hit the market? That depends on a lot of things, one of which is...

Say what you may about the current Android SDK, but it'll suffice for now - at least on the mobile scene. On the tablet front, however, it's evident that Google will need to release a revised SDK (or at least an add-on to the existing one) to be truly competitive - the current implementation simply isn't fit for development of tablet apps.

Samsung has released an add-on to the Android SDK for its Galaxy Tab... but that's the problem: it's from Samsung, and it only works with the Galaxy Tab. What we really need is a universal SDK capable of creating apps that will run on any Android-based tablet (or at least any Honeycomb tablet). Unless, of course, you want even more fragmentation... in which case, bring on the SDKs, Motorola, ASUS, and LG!

Obviously, another factor that will determine whether future Android tablets will receive attention from developers is the number of units sold. After all, if you were to develop an app for one tablet OS, which would you choose: one that has been tried and true (and has a huge user base), or one that is still in its infancy and has a relatively small user base?

One of the chief factors that will determine Android tablets' mainstream success is the quality of commercials put out for them. I have high hopes in this department, as at least two Honeycomb tablet providers - Motorola and Verizon - have proven themselves to be capable of producing amazing advertisements.

Another deciding factor will be the tablets' prices. Like it or not, the iPad has set a certain standard for tablet prices, and seeing a number of tablets powered by our beloved Google operating system start at $499 wouldn't surprise me at all. That said, I'd be delighted to see a tablet like the XOOM start at something even lower than that - I think even a price tag cheaper by only $50 or so might really help sales (especially with some kick-ass advertising to back it up). Low prices are critical to a product's success in tough economic times like these, and I think Android tablets (and tablets in general) should be no exception.

So, can Android tablets take off? They certainly have a good chance - the Honeycomb UI looks stunning, I have high hopes that Google will improve Android's multimedia situation, and I wouldn't be surprised to see a revised SDK and admirable sales figures lure developers onto the platform.

But will they? Again, it's possible, though it will definitely be an uphill battle - Apple's already nabbed a good portion of the market, and it'll be hard to convince the average consumer that Apple's products aren't the best options anymore.

Personally, I'm just happy there will finally be plausible alternatives to the iPad; however, the jury is still out on whether the rest of the world will share this opinion.