Sure, Sony Ericsson's XPERIA arc is getting all of the attention right now, but the folks at the IT168 forums have posted specs and a pair of images of a supposed XPERIA X10 Mini Pro follow-up. 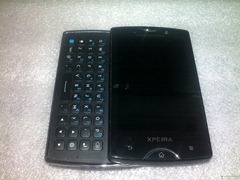 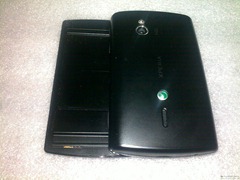 The poster lists this unnamed device as having an Adreno 205 GPU, 384MB RAM, and a "7230 CPU". No clock speed is listed, but it's safe to assume that "7230" refers to the Qualcomm MSM7230 processor which recently made an appearance in HTC's Desire Z/G2 running at 800MHz, though it is also capable of running at up to 1GHz.

These specs fall in line with the leak we saw just a couple of weeks ago from the same forum. In addition to the CPU and GPU details, the original leak also mentioned that it would be running Android 2.3 with a 3" display. There was also mention of a slide-out QWERTY, but this is the first time we are seeing images of the keyboard.

On the design front, it appears SE has opted for capacitive touch buttons over the three hardware buttons on the original Mini Pro. The keyboard keeps its uniform four-row layout, but now includes four directional buttons along with a browser shortcut key.

No official word from SE at this time, but Mobile World Congress is just around the corner. In the meantime, be sure to check out our unboxing of the original Mini Pro.

Source: IT168 via Android Central