The demo unit on display at CES appeared to be running Android 2.2 Froyo, but it is unclear what flavor of Android the final version of this device will be using. The device also has had a hardware redesign, which in Engadget's opinion is worse than the WindPad 110 as there is only one single physical key for both the back and power buttons. However, MSI has put a touch friendly custom overlay on top to display the icons on the screen at a proper tablet resolution. 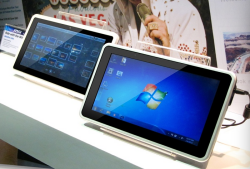 Unfortunately, there is no indication of when the Windpad 100A will be released. It may be likely that MSI is waiting for Google to release Android 3.0 (aka Honeycomb), tailored specifically for tablets, before formally launching the WindPad 100A.

MSI Unveils 10-Inch Tablets for Android and Windows Platforms and Pushes Boundaries with All-in-One Concept Designs at CES 2011
World's first 10-point multi-touch Butterfly and ultra slim Angellow AIO designs stem from MSI's continued commitment to R&D and innovating with style
2011 International CES
South Hall, Booth 30359
LAS VEGAS--(BUSINESS WIRE)--MSI Computer Corp., a leading manufacturer of computer hardware products and solutions now entering its 25th year in the industry, today unveiled its innovative new line of tablets, as well as two all-in-one (AIO) PC concept products.
"Award-winning product quality and outstanding customer service."
NEW GENERATION WINDPAD TABLETS: FEATURE PACKED AND LIGHT AS A FEATHER
MSI revealed two new generation WindPad tablets - one on the Windows platform and the other on the Android™ platform. Both tablets are a testament to MSI's innovative R&D and groundbreaking, stylish design, with functions such as G-Sensor gravity detection, which protects the internal hardware in case the unit is dropped, an ALS light sensor which adjusts screen brightness according to the surrounding light source, and Wi-Fi.
MSI WindPad 100A tablet
The lean 10.1-inch multi-touch machine – based on the Android OS and weighing in at 1.6 pounds – is powered by an ARM processor, and offers features such as a digital compass, a GPS locator, and Wi-Fi with a 3G option available. The new tablet is approximately half an inch thick at its thinnest point, and can run for eight to ten hours on a single battery charge.
The WindPad 100A offers a complete array of I/O ports, with USB and HDMI slots for expanding and connecting. To ensure that the WindPad's unlimited expandability is easy-to-use, the MSI design team carried out more than 10,000 computer simulations on the possibilities for their placement. This rigorous testing process means the I/O ports are seamlessly integrated into the tablet's design.
MSI WindPad 100W tablet
The 100W tablet, weighing in at just 1.76 pounds, features the Microsoft® Windows™ 7 Home Premium operating system and a 10.1-inch screen that supports multi-touch control. In addition to the features of the WindPad 100A, it is equipped with the Intel® Menlow™ Z530 processor and a 32GB solid state hard drive.
The MSI WindPad 100W tablet will be available in Q1 2011 with prices starting from $499.
INNOVATIVE ALL-IN-ONE PC CONCEPT PRODUCTS: STYLE & SUBSTANCE
MSI's dedication to innovation in the all-in-one PC field has borne not one, but two new concept designs for 2011.
Butterfly All-in-One PC
MSI's Butterfly AIO is the world's first AIO to use 10-point multi-touch, rather than the standard two-point touch. It has a moveable touch screen that can slide up and down to adapt to users' preferences, making multi-touch easier than ever. In addition, the system's seven inch portable media player can wirelessly access the content of the Butterfly PC, so users can enjoy movies, videos, pictures, or music wherever they are within the home, without the hassle of file transfers. And, the keyboard is set to stall in the back of the unit to save space.
Angellow All-in-One PC
The Angellow All-in-One PC focuses on chic design and compact style, with the computer ingeniously concealed in the back stand instead of the back panel to make the screen as thin as possible. As a result, the touch screen can adjust to a more comfortable angle for extended hours of usage. This model also comes with a seven inch portable media player which can wirelessly access the content of the Angellow PC.
For more information on MSI, please visit www.msi.com

Mavizon's Mavia 3G-Enabled Gizmo Plugs Into Your Car, Acts As A LoJack, Texts Your Family, ...