At T-Mobile's press schmoozing session this evening, a few HSPA+ devices were available for the blogging masses to clench in their clammy hands. One in particular that we were keen to try was the Dell Streak 7, the new big brother of the original Dell Streak (Mini 5), announced earlier today. With the 7" tablet boasting a Tegra II dual-core processing unit, our interest was piqued, so we took a look in the video below:

As you can see, the performance fell short of the hype and anticipation that many of us felt with this CES's dual-core bonanza. It might be slightly hard to detect with the frame rate of the video recording, but scrolling still felt choppy despite the power contained within. This was exacerbated by very spotty touchscreen responsiveness.

Further adding to the Streak 7's woes were its paltry WVGA resolution and disappointing viewing angles (which you can kind of see in the 8th and 9th shots below) - both areas where the Samsung Galaxy Tab is painfully superior. On the software side, the Streak 7 runs Android 2.2 with Dell's Stage UI, a combination we suspect may not be taking full advantage of the power available to it. Hopefully, at least some of these issues will be addressed before launch, or we can see this device stumbling even with its powerhouse internals and supposed four gees. 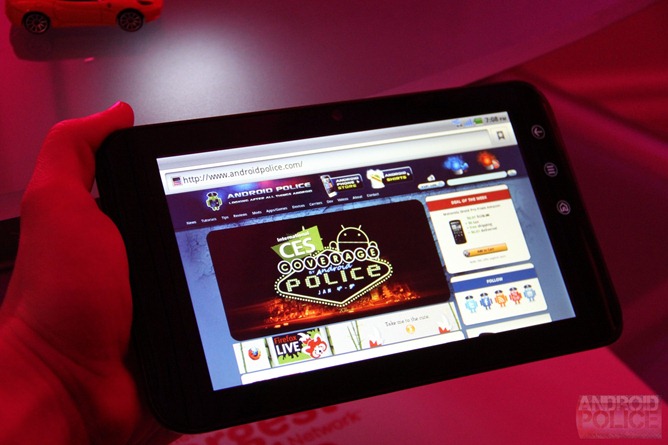 Hulu Plus Confirmed For Android 2.2