SE look to be paring back the UI modifications that we saw with the X10 Family, now decoupling the once-central TimeScape and Media Player features from the OS, similar to how Google decoupled Gmail, Youtube, and other apps from the Android core. These features are still accessible but are found mainly as widgets on the desktop. This approach represents their desire to keep the phone up-to-date, which may not garner much praise from X10 owners stuck on Éclair, but at least shows that they are looking to the future. In fact, we were told that the arc's real target OS is 2.4, which was said to be a slight bump up from Gingerbread. With the phone not set for release until some time late this quarter ("after MWC"), it would not come as a great surprise to see 2.4 on it upon or shortly after release. Further displeasing the X10 owners club is the news that multitouch worked great on the Xperia arc. You could definitely detect a hint of guilt in the repeated affirmation of multitouch's presence on the phone. 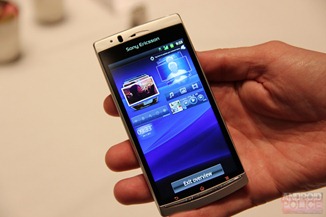 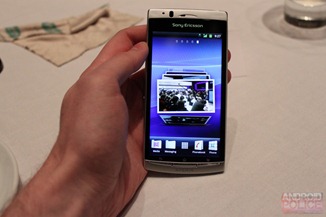 (1) Pinching the desktop shows an OS X Exposé-like overview of all of your widgets, with tapping bringing you to the relevant screen (2) SE's scrollable photo/video widget

Despite the limiting of Sony Ericsson software on the device, there was still a clear emphasis on the media capabilities they were packing into the arc. Of particular note were the full HDMI output capabilities. When we say "full", we mean you can simply mirror your phone's screen onto the TV, allowing you to do anything from gaming to browsing. Not only that, but thanks to its HDMI CEC compatibility, you can use your TV's remote to interact with displayed content, be it selecting pictures from the gallery or scrolling down through links on a page. This capability was demoed on a Bravia TV, but should work just as well on other manufacturers' units if CEC is included. DLNA is also supported.

Speaking of Bravia, the Xperia arc is Sony Ericsson's first phone to utilize the new Mobile Bravia Engine image-processing technology. This acts as an automatic image correction filter on viewing of images and videos, including existing downloaded files or content streamed online. The MBE aims to improve the reality of the image, so not all content may be affected, but particularly in dark contexts it can reduce noise and boost brightness. If the idea of an on-the-fly processing filter has you reaching for your extended battery, don't fret: MBE can be easily disabled in the display settings if you're skimping on charge.

The aforementioned media is served to you on a 4.2" FWVGA (854x480) TFT display, which Sony Ericsson has taken to calling their Reality Display. In order to improve outdoor visibility and the general aesthetics of the device, the arc's panel is glued directly to the touchscreen layer, resulting in a gapless and eye-catching screen that seems to pop out as you hold it. Sadly, the screen is not using Corning's Gorilla Glass, and the personal units we used did have a couple of scratches on them. Along with this downside are some slightly disappointing viewing angles, with the Reality Display not matching SAMOLED or SLCD for askew viewing. On a positive note, the screen itself occupied an unusually large portion of the front face, with one of the thinnest bezels we've ever seen. 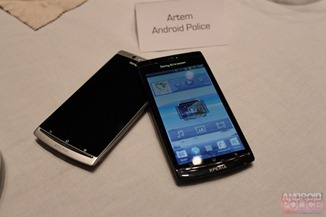 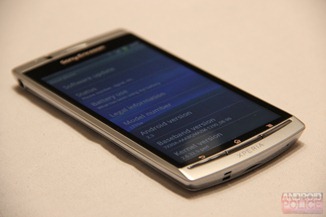 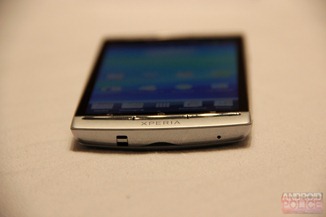 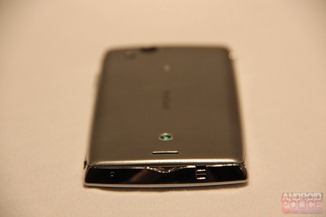 This thinness of the bezel is matched by the overall design of the phone. The arc is impressively thin, clocking it at a mere 8.7 mm at the apex of its concave back. The curve felt natural, and the phone sat nicely in hand. Weighing only 117 g, holding the feather-light arc was a nice change from some of the tubbier handsets we've tried out lately. The device is mainly made of plastic but has a metallic backbone, contributing to reasonable sturdiness for such a slim device. 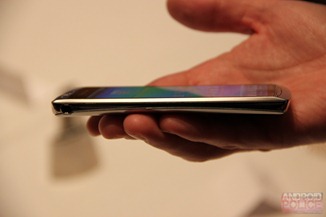 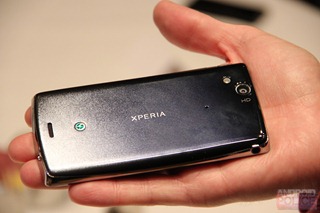 Within its lightweight exoskeleton, we find an MSM8255 with a single-core 1 GHz Scorpion CPU and an Adreno 205 GPU, a pairing previously seen in the Desire HD and myTouch 4G. There is also 512 MB of RAM and the same for internal storage. These are all juiced by a 1500 mAh battery, which is a decent size considering the arc's waistline. Despite the Gingerbread OS version, the arc does not have an NFC chip.

On the back of the device we find an 8.1 MP camera, with some interesting points to note. Sony's Exmor R back-illuminated CMOS sensor technology is present in the arc, which improves its low-light performance. Not only this, but the arc's aperture is a seriously impressive F2.4. The camera really knocked the EVO out of the park in the unscientific low-light test we tried (see the photos below). On the software side, there was a pleasing array of settings available, such as metering and aspect ratio. Sadly, this awesome camera is not matched by a great front facing camera on the front. In fact, there is no camera there at all, as it was omitted for size considerations, to create such a slim and elegant body. However, it was suggested that you could use the phone for video conferencing by plugging it into a screen and mounting it on top, as an ad-hoc webcam. 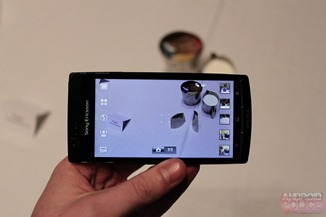 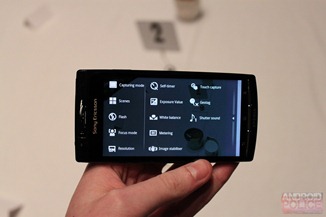 Video itself is recorded in 720P at 30 fps and benefits from digital image stabilization and color correction. The noise-cancelling microphone on the back is also used in video recording to provide stereo sound.

Another interesting connectivity feature mentioned was USB on-the-go support, aka USB host mode. This is not currently present on the device but is something in the pipeline, and we hope to see it in the light of day sooner rather than later. With an appropriate OTG dongle accessory (unannounced at the minute), the arc could well act a portable computer of sorts, allowing you to plug in a USB keyboard and type away on an HDMI-connected screen.

Sony Ericsson was coy about launch partners, but the press release indicates support for UMTS 3G on the AT&T frequencies and the device we used was roaming on AT&T with HSDPA connectivity, so it looks like the Xperia arc will follow in the footsteps of the X10 by finding a home at Ma Bell's. We're sure to see more info on this front, as well as pricing and a firm release date at MWC Barcelona in February

CES 2011: Hands-On With Motorola's Dual-Core Atrix 4G For AT&T: There's A Dock For That

Mavizon's Mavia 3G-Enabled Gizmo Plugs Into Your Car, Acts As A LoJack, Texts Your Family, ...