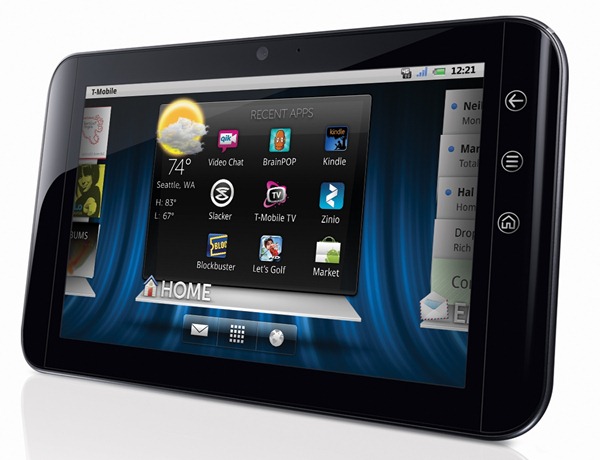 The Streak 7 is an absolutely stunning tablet (from the looks of it), and packs some damn fine specs:

Notably, the tablet will run Froyo, rather than Gingerbread or  Honeycomb. There's no mention of upgrades in the release, but if Dell's history with the original Streak is any indication, it should arrive sometime in 2013. Aside from that, as the render shows, it will apparently be packing a pretty nice custom UI as well as a a three-button (vs. the current four-button) design. Still, I'm not complaining - both the UI and physical design look gorgeous to me.

As for the 4G? Looks like they're hoping to ratchet speeds up to 21 Mbps (theoretical, download) by mid-2011, and double that to 42 Mbps by the end of the year. Jaw-dropping indeed.

and Focus on Fueling Data Adoption

“In 2010, we delivered on our ambitious goal to become America’s largest 4G network, and this year our customers will be able to experience speeds equivalent to home broadband while on the go,” said Humm. “We’ll continue to focus on fueling the adoption of mobile data, by offering innovative and affordable smartphones and tablets, as well as aggressive data plan pricing and rich and compelling data services.”

The cutting-edge download speed was demonstrated today by company representatives using a T-Mobile laptop stick developed by ZTE, capable of delivering peak download speeds of up to 42 Mbps and slated to launch in the first half of 2011. By doubling the speed of its 4G network, T-Mobile will offer its customers an unprecedented wireless experience, fueled by improved performance in the use of rich media applications, including creating and sharing mobile content, streaming video, and participating in multi-player gaming and videoconferencing.

“We are pleased to support T-Mobile as it continues to deploy and develop its 4G network, which today is delivering next-generation speeds and performance to hundreds of millions of customers,” said Angel Ruiz, president and CEO, Ericsson North America. “We are confident that HSPA+ will continue to offer a viable and cost-effective alternative to LTE and WiMAX, providing a comparable 4G experience to customers for the foreseeable future. And, with a strong and growing ecosystem of network equipment and handsets, we anticipate that HSPA+ can develop into one of the most advanced technology platforms in the industry.”

“Consumers are increasingly embracing the benefits of smartphones, with 80 percent of U.S. mobile customers wanting a smartphone, and as many as 100 million of them not yet having one,” said Cole Brodman, chief marketing officer, T-Mobile USA. “Our compelling offering of affordable broadband devices and consumer-friendly data plan pricing will enable customers to step up to mobile data and 4G, and our customers will not pay a toll to ride on our 4G superhighway.”

About the Dell™ Streak 7

Based in Bellevue, Wash., T-Mobile USA, Inc. is the U.S. wireless operation of Deutsche Telekom AG. By the end of the third quarter of 2010, approximately 130 million mobile customers were served by the mobile communication segments of the Deutsche Telekom group — 33.8 million by T-Mobile USA — all via a common technology platform based on GSM and UMTS, the world’s most widely-used digital wireless standards. Today, T-Mobile operates America's largest 4G network, and is delivering a compelling 4G experience across a broad lineup of leading devices in more places than competing 4G services. T-Mobile USA’s innovative wireless products and services help empower people to connect to those who matter most. Multiple independent research studies continue to rank T-Mobile USA among the highest in numerous regions throughout the U.S. in wireless customer care and call quality. For more information, please visit http://www.T-Mobile.com. T-Mobile is a federally registered trademark of Deutsche Telekom AG.  For further information on Deutsche Telekom, please visit www.telekom.de/investor-relations.

1 Source: The Nielsen Company estimation based on an independent benchmark. Nielsen’s benchmark tests included the following networks: AT&T-HSPA, Verizon-EVDO-RevA, Sprint-EVDO-RevA, and T-Mobile-HSPA+. The tests were conducted between May 28, 2010, and Nov. 30, 2010. Results do not reflect all commercially available services in the market, including AT&T’s HSPA+, Clearwire’s WIMAX and Verizon’s LTE networks. Copyright (2010) The Nielsen Company.