We've known about the fancy new music player contained in Android 3.0 (aka Honeycomb) since Google I/O, but up until now, we haven't really had a chance to get a look at it ourselves. Well the suspense ends today - an APK has just been leaked and is now available to download.

First off, the much-anticipated wireless syncing feature isn't here, as this is most likely a beta version of the final app (which wouldn't be surprising considering how buggy it is in its current incarnation). What it does have, however, is a gorgeous new UI. Judging by what I'm seeing in the video above, it's a lot like the Gallery app that's been with us since Éclair, right down to the stacks of music seen in landscape mode. Additionally, there's a menu button in the top right corner - Engadget speculates that this might hint at fewer hardware buttons on future Android devices, which doesn't seem entirely unlikely to me, especially not on the tablet scene. Turns out this button actually takes you to the "Now Playing" screen.

We've mirrored the APK for you, so download away if you so desire.

Update: I've downloaded it for myself and played around with it a bit. It installed without issue on my EVO, though another app came bundled with it: "JumperTest." It has the same icon as the new Music app, which was certainly confusing at first. 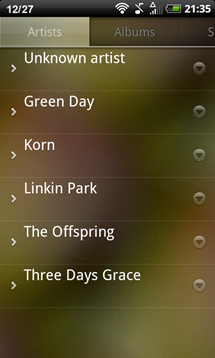 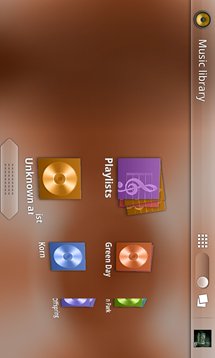 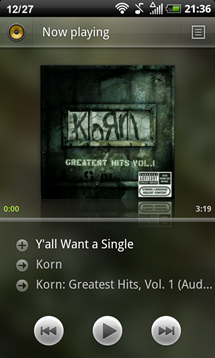 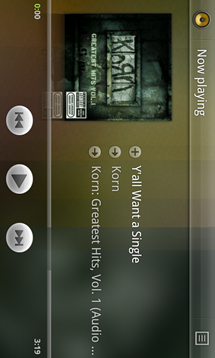 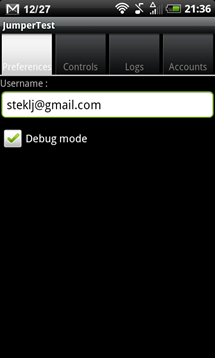 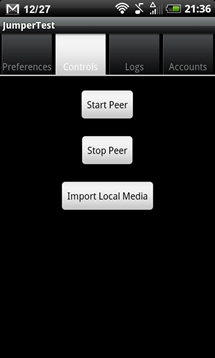 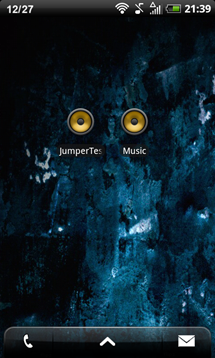 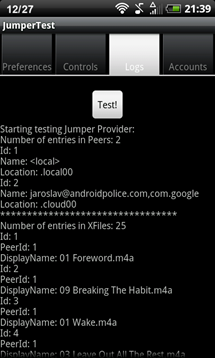 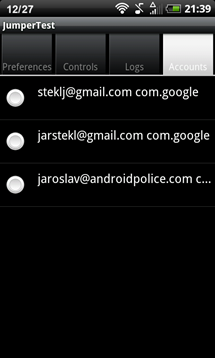 Upon closer inspection, however, it became evident that "JumperTest" is actually a beta version of the wireless syncing feature, though it is not yet possible to... you know, wirelessly sync your music between your computer and your phone. Instead, the "JumperTest" app just gives you a bunch of logs, the option to select which account to sync your music with (this option is also available in the "Accounts & Sync" section of "Settings"), the ability to start and stop "Peer," and to "Import Local Media." Hopefully Google will streamline this and package it right into the main Music app before Honeycomb rolls out.

As for the new Music app itself, it's pretty nice - at least concept-wise. As you may have noticed already, there's a background that changes with the music being played, and much like the Gallery app, everything tilts in landscape mode as you tilt your phone. Speaking of landscape mode, clicking on an artist's music (which appears in a nice stack) should take you to the artist's songs, but it instead tells you that it is an "Unknown artist" whom you have 0 songs from. Needless to say, there are a few bugs that still need to be ironed out.

As for the new buttons in the upper right corner, there are two next to the slider which switch between Album mode and the non-functional Artist mode. Next to that is another button which looks sort of like a Menu button, but which actually takes you to the "Now Playing" screen. Finally, the scroller on the bottom allows you to... well... scroll through your music.

In portrait mode, you switch between Artist mode, Album mode, Song mode, Playlist mode, and Genre mode by scrolling through a list of tabs on the top - odd, considering that Google recently rid the Market of tabs, but pretty and functional nonetheless. Other than that, there aren't really a lot of changes from the older Music app.

I wouldn't recommend using the Honeycomb Music app as your daily music-playing solution, at least not yet. As of right now, it's too buggy (it force closed on me several times during my half-hour or so hands-on period), and some of the features (like the eye-catching landscape view) aren't quite there yet. For now, I'll continue to use Winamp, but I'll say this: Android 3.0 can't drop soon enough.